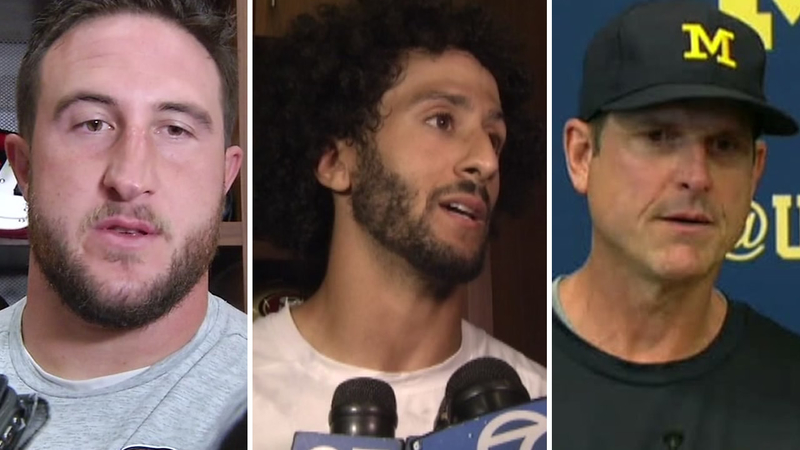 SANTA CLARA, Calif. (KGO) -- ABC7 News went inside the San Francisco 49ers' locker room on Monday to hear what Colin Kaepernick's teammates think of the controversy surrounding him. On Friday night, before the Niners played the Packers, the quarterback didn't stand for the national anthem. It's the second time he's done that since the preseason started.

Tuesday is the 49ers' weekly press conference, so we'll likely hear more. For now, Kaepernick's teammates we talked to said they may not agree with his decision, but they support his right to protest. Of course, there are many critics who don't.

"That's something that needs to change," he said in a Sunday interview.

His team seems to respect his right to protest.

"I think there definitely is racism in this country that needs to be addressed," said offensive tackle Joe Staley. "He's voicing his opinion."

And 49ers offensive coordinator Curtis Modkins added, "I support our flag personally, but I also support someone's right to feel how they feel."

But there is condemnation.

Former 49ers head coach Jim Harbaugh, who's now with the University of Michigan, had this to say, "I don't respect the motivation or the action."

The San Francisco Police Officers Association sent a letter to the president of the 49ers and the NFL commissioner saying:

"We will not stand by while he attacks police officers in this country with statements such as, 'People are on paid leave while people of color are killed.'"

It's not the first time athletes have used their celebrity to spark a national debate. Track stars Tommie Smith and John Carlos raised their fists during the national anthem at the 1968 Olympics. Smith is now 72 years old and applauds Kaepernick's activism.

"They are truths, and those truths live," said Smith during a Skype interview. "He's only telling what has happened."
The uncle of Oscar Grant, whose fatal shooting by BART police sparked national outrage, expects Kaepernick's decision to gain momentum as part of the Black Lives Mattter Movement.

"Yes, I believe by him taking that stand, he'll will also encourage others to stand with him," said Oscar Grant's uncle, Cephus Johnson.

Or in this case, to sit.

"I'll continue to sit," said Kaepernick in a Sunday interview. "I'm going to continue to stand with the people."

On Monday, both the Alameda County Sheriff's Office and the San Francisco Police Union invited Kaepernick to visit their training facilities to get a firsthand look at what it takes to be a law enforcement officer.