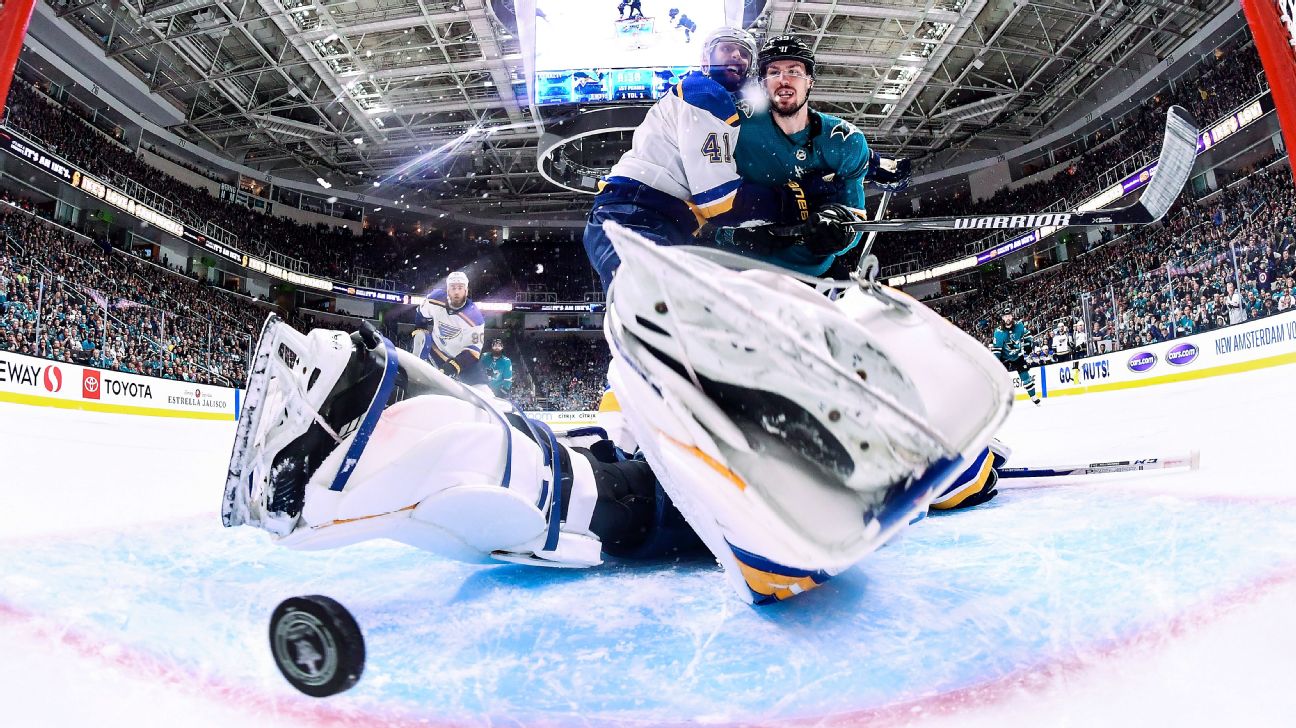 ST. LOUIS -- Erik Karlsson, Joe Thornton and Joe Pavelski packed up their lockers and discussed varying degrees of postseason injuries Thursday, before addressing the fundamental question facing the San Jose Sharks this offseason: From this trio of star unrestricted free agents, which ones will return next season?

Karlsson, 28, was acquired before the season in a blockbuster trade with the Ottawa Senators. He had 45 points in 53 games, but that latter number was the significant one: Karlsson was slowed by a groin injury that eventually became such a hindrance to his skating that he missed the last four periods of the Sharks' season, including all of their Game 6 elimination by the St. Louis Blues in the Western Conference finals.

"It's nothing major. It's just going to take some time," said Karlsson, who was unsure about whether the injury would require surgery. "I'm still in the process of figuring all that out. But it's something I've been dealing with since January. I was very fortunate to play all the games, except for the last one, in the playoffs."

While the anticipation of Karlsson's free agency is somewhat tempered by his health, the defensemen should remain one of the summer's most coveted commodities. There were reports the Sharks were willing to offer him an eight-year extension. Would he consider staying in the Bay Area?

"I haven't really thought about any of that," he said. "I've been treated with nothing but class and respect here. I've seen the best side of this city and this organization, and I've liked everything I've seen. But I have to regroup and assess everything. Whatever happens is going to happen for a reason."

General manager Doug Wilson, who declined to share his plans for Karlsson, estimated the defenseman was "healthy for about six weeks" during his tenure with the Sharks.

Pavelski, who turns 35 in July, also missed Game 6 against the Blues, after missing six games against the Colorado Avalanche in the previous round. To say the Sharks' captain paid a physical toll would be an understatement: There was a puck off his mouth early in the first round, the horrific concussion he suffered when he head bounced off the ice in Game 7 against theVegas Golden Knights, the reaggravation of a knee injury on a hit by St. Louis defenseman Alex Pietrangelo in Game 5 of the Western Conference finals and, revealed for the first time Tuesday, a hand surgery he underwent two weeks ago.

An unrestricted free agent, Pavelski said he was expecting he would return to the Sharks.

"I'm pretty confident. I have a pretty strong belief system is that I'll be back here," he said. "It's not about dotting the 'I's" yet. But we love it here. I'm sure things will move along."

Karlsson and Pavelski intend to continue on in the NHL next season. Thornton, who turns 40 in July, faces the question of whether it's time to hang up the skates.

Thornton said he'd discuss his future with team management, ownership and his family. "We'll see. I haven't made any decision yet. I feel like I can still play, that's for sure," said Thornton, who had 51 points in 73 games and is 14th on the all-time points list (1,478) in NHL history.

His quest for his first Stanley Cup was seen as a rallying cry for the Sharks, and was cited by several teammates in stating their regrets for the season ending two wins shy of the Stanley Cup Final. But Thornton felt the whole thing was overblown.

"Yeah I didn't buy into that," he said with a laugh. "I think that was more for you guys."

"He's a Shark," said Wilson, who said he hoped Thornton would return. "I have such tremendous respect for him, not just as a hockey player, but as a man. He can take as long as he'd like to make a decision. We love him."
Report a correction or typo
Related topics:
sportsespnnhlerik karlssonjoe thorntonjoe pavelskisan jose sharks
Copyright © 2022 ESPN Internet Ventures. All rights reserved.
TOP STORIES
How concerned should you be of new omicron subvariant BA.2?
Expert explains why new COVID variants may keep popping up
WATCH TOMORROW: 49ers-Rams NFC Championship Game preview
COVID-19 updates: SF to change indoor mask rules
SFPD links 6th death to 'The Doodler' serial killer, increases reward
49ers-Rams NFC Championship could break ticket record
Teen loses thousands on Zelle after getting offer to be a 'sugar baby'
Show More
California representative pushing for 4-day workweek in new bill
NatGeo debuts 'Into the Depths' podcast on search for slave shipwrecks
7-year-old SF girl and mom pray for miracle to avoid eviction
World remembers Holocaust as antisemitism rises in pandemic
49ers Jimmy Garoppolo blocking out all the 'outside noise'
More TOP STORIES News