Kyle Schwarber moved to second in Cubs lineup for Game 6 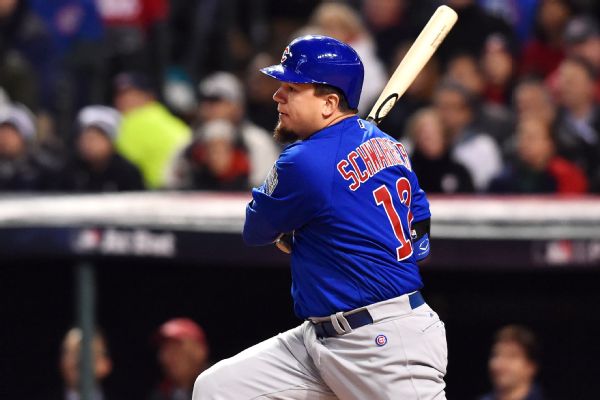 CLEVELAND -- Looks like Cubs manager Joe Maddon is so happy to get slugger Kyle Schwarber back in his lineup that he wants to see him as much as possible. Maddon will hit Schwarber second in the Cubs' lineup for Tuesday's Game 6 in the World Series at Cleveland.

Schwarber's return will push Kris Bryant to third in the order. Rizzo will bat clean-up, followed by Ben Zobrist. Dexter Fowler remains in the leadoff spot.

Addison Russell bats sixth, followed by rookie catcher Willson Contreras, who gets the start over Miguel Montero and David Ross. He'll form a battery with righty starter Jake Arrieta, who beat the Indians in Cleveland in Game 2.

Jason Heyward, who has three hits in his last two games after being benched earlier in the series, starts in right and bats eighth. Javier Baez rounds out the lineup. He was the MVP of the NLCS but has struggled at the plate in the World Series.

Schwarber's dramatic return from an early season knee injury that limited him to two regular season games caused a sensation as the World Series dawned. After being cleared by his doctors to hit, Schwarber was sent to the Arizona Fall League, where he played three games. He was then whisked by private plane to Cleveland and added to the Cubs' World Series roster.

Batting fifth, Schwarber proved his worth while serving as Chicago's designated hitter for Games 1 and 2, going 3 for 7 with a double, two walks and two RBI as the Cubs earned a split. Schwarber has 10 RBI in 12 career postseason games.

When the series shifted to Wrigley Field, Schwarber was not cleared by doctors to play in the field, limiting him to pinch-hitting duties. He batted just once in the three games, two of which the Cubs lost. He was retired on a pop-up in Game 3, dropping him to 0 for 10 in his career as a pinch-hitter.

While Schwarber may not look like a prototypical No. 2 hitter, neither did Bryant, the MVP candidate who has started in that slot for most of the second half of the season. Schwarber owns a career .353 on-base percentage, not including the postseason.

The Indians lead the series 3-2 in their effort to win the franchise's third World Series and first since 1948. The Cubs are trying to become the sixth team to rally from a 3-1 World Series deficit in the best-of-seven format. If they can, it will be the Cubs' first championship since 1908 and snap the longest title drought in sports.