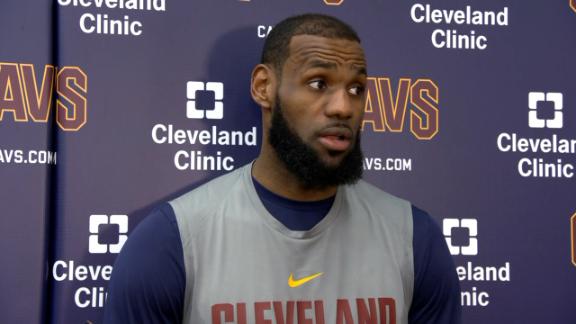 "The state of racism will never die, but what we cannot do is allow it to conquer us as people," James said after Cavs shootaround in preparation for their NBA Finals rematch with the Golden State Warriorson Monday. "We can't allow it to divide us. ... The guy in control has given people and racism, and negative racism, an opportunity to be out and outspoken without fear. And that's the fearful thing for us because it's with you, and it's around every day, but he's allowed people to come out and just feel confident about doing negative things. ... We can't allow that to stop us from continuing to be together and preach the right word of livin' and lovin' and laughin' and things of that nature. Because would we want to live anywhere else? I don't think so. We love this place."

James was referring to President Donald Trump, whose policies and rhetoric since he came into office have been repeatedly challenged by James and other leaders in the African-American community as divisive and harmful.

"We are in a difficult state right now as Americans as well with the leader of our country. But us, like I said, no matter the religion, no matter the shapes and sizes, we all have to continue to come together and shine a brighter light on, you know, I mean, (I don't want to) use the word stupidity, but that's basically what it comes down to."

With the country honoring the 50th anniversary of King Jr.'s assassination this year, James emphasized the ultimate sacrifice the civil rights leader made during a tumultuous time in the United States.

"You always hear people saying, 'risking their life,'" James said. "He actually gave up his life for the betterment of all of us to be able to live in a free world and for us to be able to have a voice, for us to go out and be free no matter your skin color, no matter who you are, no matter the height and size and the weight or whatever the case may be, wherever you are, he had a vision and he took a bullet for all of us. Literally. In the rawest form that you could say that. He literally took a bullet for us. And for us to stand here even though we're trying to be divided right now by somebody, today is a great day for people to realize how America was built and how we all have to stand united in order to be at one."

James was asked about the Black History Month edition of his LeBron 15 signature sneaker which has the date 07/13/2016 printed on the base. James explained that was the day he opened the ESPY Awards alongside friends Chris Paul, Carmelo Anthony and Dwyane Wade to speak about the importance of athlete activism and community development.

James fondly recalled visiting the National Civil Rights Museum built around the Lorraine Hotel in Memphis - the site where King Jr. was shot and killed on April 4, 1968 - and the impression it left on him.

"It was a very eerie and powerful impact," James said. "To be able to be there at that hotel, at that site, where he was assassinated was a very eerie feeling and a very powerful feeling at the same time to be able to grace a part of the movement, be a part of the movement. You kind of felt that, so. I'm looking forward to the opportunity where I can take my kids there and they can completely understand what they're actually witnessing."

The Cavs and Warriors are two of the 22 teams playing NBA games Monday - more than two-thirds of the league. James said it was an "unbelievable" way for his sport, which is comprised of predominantly African-American athletes - to honor King Jr.'s legacy.