Linebacker Bowman retires from NFL as a 49er 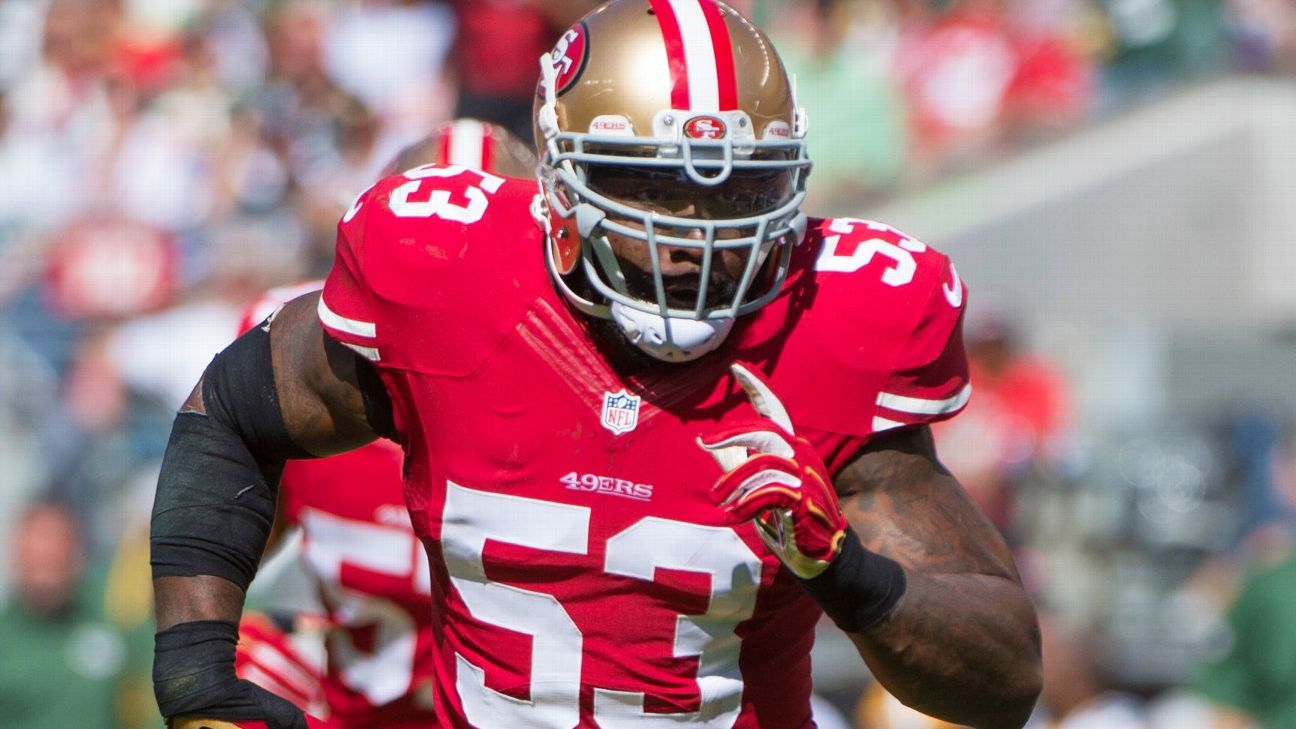 SANTA CLARA, Calif. -- Former San Francisco 49ers linebacker NaVorro Bowman is calling it a career. But before he does, he wanted to make sure he was going out with the team that brought him into the league in 2010.

The Niners announced Tuesday that Bowman stopped by the team's training facility to inform the organization that he would be retiring and that he wanted to retire as a member of the team for which he played seven-plus years.

At the moment, the 49ers have a full 90-man roster and can't sign Bowman to a ceremonial one-day contract so he can officially retire with the team. Regardless of the formality, Bowman wanted it to be known that he was going out as a 49er.

Bowman did not play in the NFL in 2018 after starting the final 10 games of the 2017 season with the Oakland Raiders. As it turned out, those 10 contests were the only games in his career in which he didn't suit up in the 49ers' scarlet and gold.

San Francisco selected Bowman in the third round (No. 91 overall) of the 2010 NFL draft out of Penn State, and he immediately helped form one of the league's most feared linebacking duos with Patrick Willis.

Bowman went on to be named first-team All-Pro four times with three Pro Bowl appearances and was at the center of a dominant defense that led the Niners to three straight NFC championships beginning with the 2011 season. He finished his time with the 49ers with 709 tackles, 12.5 sacks, seven forced fumbles and four interceptions.

Bowman also provided some of the franchise's most memorable moments, including an 89-yard interception return for a touchdown that nailed down a playoff spot in 2013 and closed down Candlestick Park and the pass breakup in the NFC Championship Game that sent the Niners to Super Bowl XLVII.

For his career, Bowman had 764 tackles, 14 sacks, seven forced fumbles and five interceptions.

All of that production came despite a knee injury that kept Bowman out for the entire 2014 season and an Achilles injury that cost him the final 12 games of the 2016 season.

The 49ers released Bowman on Oct. 13, 2017, after they began to reduce his workload and he expressed frustration because of it. But Niners general manager John Lynch and coach Kyle Shanahan made it clear at the time that they understood and respected all Bowman had done for the franchise.

"Bo's been great to me," Shanahan said then. "I've always had the utmost respect for him, just from film and playing against him since I've been here to get to know him as a person. He's as cool as any guy I've been around."

Bowman watched Tuesday's organized team activity with his family from the sideline before breaking down the team huddle at the end of the practice.
Report a correction or typo
Related topics:
sportsespnsan francisco 49ersnflnavorro bowman
Copyright © 2020 ESPN Internet Ventures. All rights reserved.
More Videos
From CNN Newsource affiliates
TOP STORIES
CA mother with infant twins homeless after being evicted