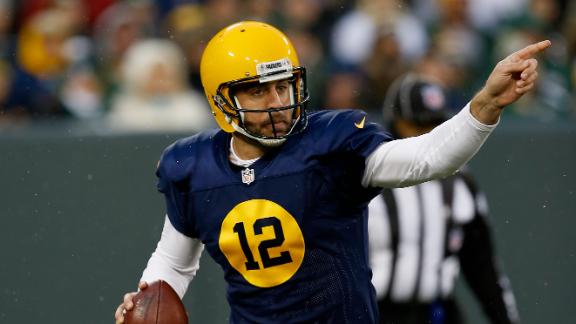 As Green Bay Packers quarterback Aaron Rodgers used his bag of tricks against the Philadelphia Eagles on Sunday, another "Magic" couldn't help but take notice.

As the Packers QB started to dismantle the Eagles' defense en route to a second consecutive 50-point output, Magic Johnson took to Twitter to heap praise on Rodgers via a lofty comparison to fellow Pro Basketball Hall of Famer Larry Bird.

Bird and Johnson have been linked since the 1979 NCAA championship game and throughout their NBA careers -- as their rivalry was the key storyline in the struggle between the Boston Celtics and the Los Angeles Lakers during the 1980s.

Rogers threw for 341 yards and three touchdowns in the Packers'53-20 victory, while captaining a balanced attack that jumped to a 30-6 lead by halftime.

Since telling fans to "R-E-L-A-X" after a Week 3 loss to the Detroit Lions, Rodgers has guided the Packers to six wins in seven games. In that span, he has averaged 293 yards per game and has 23 touchdown passes and just two interceptions.

He alsohas extended his streak to 322 passes at Lambeau Field since his last interception there -- an NFL record for consecutive passes at home without an interception, according to the Elias Sports Bureau. The previous mark was 288 by Tom Brady at Gillette Stadium (2002-04).

"This is not easy," Rodgers said after the game."There's a lot of preparation that goes into it. It takes 11 guys to win, to do the job to make something like that happen."