NaVorro Bowman set to play for Raiders days after signing 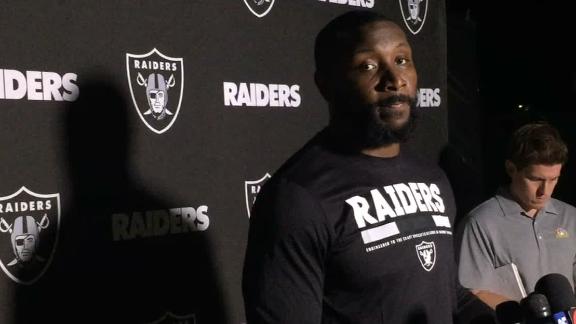 ALAMEDA, Calif. -- NaVorro Bowman is expected to play for the Oakland Raiderson Thursday night against the Kansas City Chiefs, three days after being signed to a one-year, $3 million contract.

The four-time All-Pro inside linebacker, who has endured devastating injuries to his left knee and left Achilles in 2014 and 2016, was released by the San Francisco 49ers on Friday.

"He's a veteran," Raiders coach Jack Del Rio said of Bowman on Wednesday. "I mean, he understands ball. We've not tried to install the entire playbook but specific game plan things and he's had a good week. Even though it's a short week, we feel real good he'll play.

"He is very instinctive and he's a veteran guy that's been there before. So he understands what it looks like to line up against a good football team."

The Raiders (2-4) are looking for a spark to help them end a four-game losing streak against the first-place Chiefs (5-1), who have won four straight games against Oakland.

Earlier this week, Bowman said he would play if he could get caught up on the Raiders' schemes and terminology.

The Raiders have had a huge need for a veteran presence in the middle of their defense since the offseason began and linebacker Perry Riley Jr. was not re-signed.

Fifth-round draft pick Marquel Lee was the starter at middle linebacker before suffering an ankle injury two weeks ago that kept him out of last weekend's loss to the Los Angeles Chargers.

Undrafted rookies Nicholas Morrow and Xavier Woodson-Luster are the other two inside linebackers on the roster.

"The work ethic and all that and I think the other part that's really pretty cool is the kind of tutoring of the younger players at that position," Del Rio said of Bowman's influence. "I mean, they're just soaking it up. When do you lift? How often do you lift? When do you leave? When do you cover this?

"It's good stuff to have for a really young group."