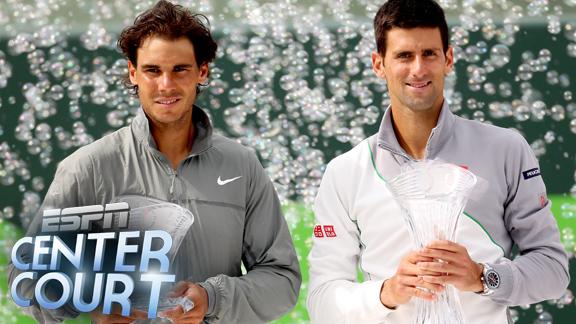 Djokovic dominated from the start and closed out the victory by winning a remarkable exchange to beat Nadal 6-3, 6-3 Sunday in the final of the Sony Open.

Nadal fell to 0-4 in finals at Key Biscayne, one of just three ATP Masters 1000 events he has yet to win. As for Djokovic, only six-time champion Andre Agassi has won the men's event more.

Djokovic erased the only break point he faced, committed just 15 unforced errors and won a scrambling, 30-shot rally on the final point. He completed a March sweep after beating Roger Federer in the final at Indian Wells two weeks ago.

Even so, Nadal will remain ranked No. 1 and Djokovic No. 2. Either Nadal or Djokovic is the reigning champion in all nine Masters 1000 tournaments.

Nadal and Djokovic have played 40 matches, the most of any men's pairing in the Open era, and few have been so lopsided.

Nadal stood six feet behind the baseline to return and often remained on the defensive from there, with his shots lacking their normal depth. Djokovic was quick to step into the court and even won a point playing serve and volley.

Djokovic also had the superior serve, and his agility allowed him to chase down shots Nadal usually counts as winners.

Nadal's lone break-point chance came in the opening game, and he failed to convert. Djokovic broke in the sixth game, hitting three consecutive winners before Nadal put a backhand in the net.

Djokovic broke again in the opening game of the second set by winning a 22-shot exchange, and he held serve the rest of the way. With Nadal's loss, Spanish men fell to 0-7 in Key Biscayne finals.

Djokovic won all eight sets he played in the tournament, and twice advanced because of walkovers.

The clay-court season looms, and the result might be different when the rivalry resumes on Nadal's favorite surface. He still leads the rivalry, 22-18.