Peterson's agent says no to meeting 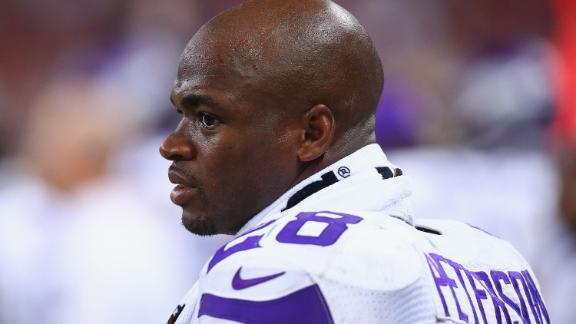 MINNEAPOLIS -- As the Minnesota Vikings prepare to head to Phoenix for the NFL owners meetings next week, their relationship with their erstwhile franchise player still appears to be on the rocks.

Adrian Peterson'sagent, Ben Dogra, confirmed Friday that he declined an invitation to meet with Vikings general manager Rick Spielman at the owners meetings after Spielman informed him Wednesday that the Vikings would not release Peterson. The news, which was first reported on Friday by Yahoo! Sports, is another sign that the Vikings and Peterson remain at odds.

The running back told ESPN last month he was "still uneasy" about the idea of returning to Minnesota. The team's decision to put him on the commissioner's exempt list -- after initially announcing he would play during his child injury case in Texas -- was an "ambush," Peterson said at the time.

He added he did not believe the Vikings had shown him sufficient support during his legal battle, and expressed doubt about how his family would be received by the media and the public if he returned to Minnesota.

Were it solely up to his wife, Ashley, Peterson said last month, "I'd be somewhere else today."

A league source said Friday, meanwhile, that Peterson's preference is to play elsewhere next season.

Peterson is under contract through 2017, and is scheduled to make $12.75 million this season. The Vikings appear willing to pay Peterson his salary for 2015, and a restructured contract would likely put some guaranteed money in Peterson's bank account in place of a deal that currently has none remaining. It is certainly within the Vikings' rights to keep Peterson under their control, effectively daring him to sit out and not collect his 2015 salary once he is reinstated.The running back told ESPN last month he didn't believe the Vikings would do that, however.

"I understand they respect me enough that if, for whatever reason, I wasn't happy and didn't want to come back to Minnesota, they wouldn't want me to be unhappy," Peterson said. "I know I have enough respect and know those guys well enough to know that much about them."

The Vikings could eventually call Peterson's bluff and force him to decide between playing for them or sitting out a second consecutive season at age 30. But after Peterson met with Spielman and coach Mike Zimmer in Houston earlier this month -- and flew to New York for a meeting with Spielman and Vikings ownership the next week -- the two sides hadn't scheduled another discussion. The fact that Dogra declined to meet with Spielman, after the Vikings told Dogra they would not grant the running back his most direct route to another team, only serves to suggest Peterson would prefer to continue his career elsewhere.