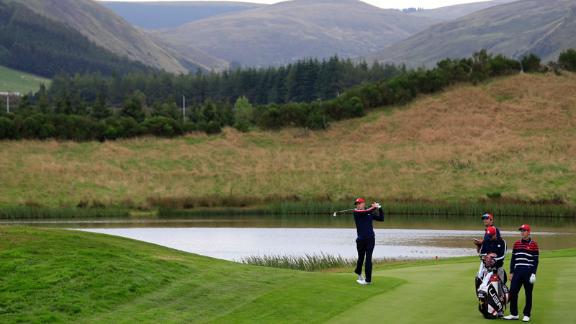 GLENEAGLES, Scotland -- Few in golf can give the needle like Phil Mickelson, and Lefty delivered on Wednesday at Gleneagles.

Asked about the perceived lack of chemistry due to infrequent victories for the United States in the Ryder Cup, the five-time major champion had a ready retort.

"Well, not only are we able to play together, we also don't litigate against each other, and that's a real plus, I feel, heading into this week," Mickelson quipped.

Mickelson said it with a smile and was clearly joking, but the comment hits home.

A good bit of the pre-Ryder Cup buildup has centered on the possible pairing of Rory McIlroy and Graeme McDowell, longtime friends who have acknowledged that their relationship has been strained by an ongoing lawsuit involving both players.

McIlroy has sued Horizon -- his former management team that still represents McDowell. Part of the claim involves the commission structure and the belief that McDowell got a better deal than McIlroy.

Both players said it would not be an issue here when the 40th Ryder Cup begins Friday.

This is the 10th consecutive Ryder Cup dating to 1995 for Mickelson, who has never failed to make the team on points. But along with that comes his record: 14-18-6.

The 18 defeats -- the last of which was an excruciating 1-up singles loss to Justin Rose at Medinah in 2012 -- is the most in U.S. Ryder Cup history.

When a reporter from Scotland asked about his Ryder Cup record being a "blot" on an otherwise Hall of Fame career, Mickelson said: "I wouldn't say it as eloquently as you did by calling it a blot, but I think that it's a record I'd like to improve on."

"Are you always this half-empty?" he said. "Is that how you look at things? Because we're more optimistic here. ... Absolutely I would like to improve my record. That's certainly a goal. It doesn't take much to improve my winning percentage, I'll say that.

"But I've got a partner. Obviously I'm going to play again with Keegan [Bradley]. I don't think I'm letting go any secrets there."

Mickelson and Bradley were 3-0 together at Medinah and also were 2-1-1 together last year at the Presidents Cup.

Bradley was one of Tom Watson's captain's picks and was clearly chosen to partner with Mickelson, who is coming off his worst season in more than 10 years -- zero victories and just one top-10 on the PGA Tour.

"Man, he is playing so good," Bradley said of their practice rounds. "He's rolling it [putting] better. ... I'm so pumped. I've got such a good partner. He's playing really well. He's clearly been working back home on the range and putting and playing. And he's playing great, and he's motivated to win this Ryder Cup."

Although plenty can change by Friday, the possible U.S. pairings became more clear.

Mickelson and Bradley are a virtual certainty, as are Bubba Watson and Webb Simpson. The others that have emerged: Jim Furyk and Patrick Reed; Rickie Fowler and Jimmy Walker; Zach Johnson and Hunter Mahan; and Matt Kuchar and Jordan Spieth.

Quiet Please: 2014 Ryder Cup
Direct from Scotland, Michael Collins analyzes the 40th Ryder Cup from Gleneagles. Does Team Europe have a home-field advantage? Who will be the biggest surprise player? What are the characteristics of the Gleneagles course and which team will win it?
Related topics:
sportsespnrory mcilroyphil mickelsonlawsuitgolfryder cupkeegan bradleygraeme mcdowell
Copyright © 2020 ESPN Internet Ventures. All rights reserved.
More Videos
From CNN Newsource affiliates
TOP STORIES