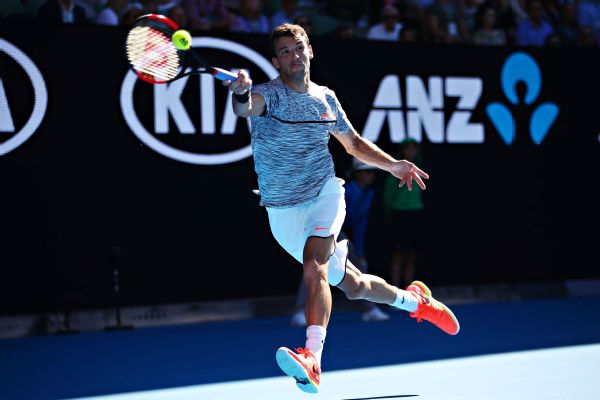 MELBOURNE, Australia -- At the behest of new coach Carlos Moya, Rafael Nadal spent the bulk of his offseason drilling one forehand after another. Not so long ago, it was his surefire shot, the one that inflicted more pain on his opponents than any other on his way to 14 Grand Slam titles.

On Wednesday, it was Nadal's other wing that turned the tide in a tight opening set against third-seeded Milos Raonic. Up 4-3 and with a break point, No. 9 Nadal hit a beautifully timed backhand lob just out of the reach of his 6-foot-5 opponent to take the lead, eventually the set and ultimately the match 6-4, 7-6 (7), 6-4 to reach the Australian Open semifinals.

Perhaps unthinkable heading into this first major of the season, Nadal joined 30-something peers Roger Federer, Serena Williams and Venus Williams in the final four of the same major for the first time since 2008. Now 30, Nadal is the latest in a festival of thriving veterans to make this year's final four, which, remarkably, is the first time since the 1968 French Open (the first major of the Open era) that a trifecta of 30-somethings are around at this stage of a Slam. The one misfit, at least by comparison, is 25-year-old Grigor Dimitrov, who earlier in the day knocked off No. 11 David Goffin 6-3, 6-2, 6-4 to reach his second career Grand Slam semifinal.

"Today against a very, very difficult opponent," Nadal said in his on-court interview. "I decided to go a little bit more inside the court on the return."

More or less an afterthought heading into Melbourne, Nadal was the aggressor throughout his encounter with Raonic. He smoked 40 winners, one more than his opponent, and converted 72 percent of his first serves.

Although he won two titles a season ago, Nadal openly admitted he was struggling with confidence on his forehand. "I missed more than what I need. That's it," he told the media last October in Beijing. But the return of vintage Rafa has been building slowly since the start of this event.

In the third round, Nadal broke a five-set hex of sorts with a workmanlike win against talented teenager Alexander Zverev. Despite a third-set hiccup in the next round versus sixth-seeded Gael Monfils, Nadal was never in any real trouble.

But it was his anticipated showdown with Raonic, who is widely considered a future Grand Slam champion, that was supposed to showcase the vulnerabilities Nadal had displayed the past couple of years.

Yes, there was a troublesome game when he was down 5-4, 15-40 and facing two set points in the second set. But an unreturnable serve out wide in the deuce court, followed by a Raonic misfire on his backhand that missed the sideline by a wide margin gave Nadal another chance. In the tiebreaker, Nadal escaped a heap of trouble, including one when Raonic overcooked a second serve on his fourth set point. In all, Raonic had six chances to snare the set and tie the match, but too many mistakes cost him, including some bad luck when a forehand down 8-7 in the tiebreaker clipped the tape and sailed wide.

"I think I am not a very arrogant person, so I always have doubts," Nadal said. "Is normal, even when I was winning. That's good. When you have doubts you are ready to work more.

"I think I had a great career, but I also had a lot of tough moments that make me enjoy even more the good moments I'm having here."

Just three weeks ago, Raonic took out Nadal in three sets in the Brisbane International quarterfinals. Afterward, Raonic spoke of his stellar serving and ability to dictate points. But Wednesday was a different story.

A poster child of players born in the '90s, Raonic was the first player born that decade to reach the top 10. He was also the first to appear in a Grand Slam final (Wimbledon, 2016) and win a tour-level title (San Jose, 2011). But against Nadal, Raonic showed little of his star potential.

He committed 32 unforced errors, but beyond the stat sheet, Raonic was frustrated throughout. He took a long timeout to tend to a right thigh injury in the second set. His movement never matched that of his more energized opponent Wednesday.

Why is it, Raonic was asked, that something always seems to go wrong when he gets close to the sport's ultimate prize?

"I don't know," Raonic said, "I don't want to depress myself thinking about that right now."

Known early in his career as "Baby Fed," Dimitrov broke through in 2014 at Wimbledon, where he beat Andy Murray before falling to eventual champion Novak Djokovic. This is Dimitrov's best effort in Melbourne; he lost to Nadal in the Australian Open quarterfinals, also in 2014.

Dimitrov saved eight of 10 break points against Goffin, who was trying to become the first Belgian man to reach a major semifinal.

Dimitrov -- 10-0 for the season, the best of any player -- surpassed the longest winning streak of his career. He won the title three weeks ago in Brisbane, Australia. A title in Melbourne would help fulfill the great expectations created when Dimitrov broke into the top 100 six years ago at the age of 20. Winning this championship would vault his ranking to a career-high No. 6.

"It's been a tremendous roller coaster, but I'm happy, in a way, the way it's gone," Dimitrov said. "I'm appreciating things much better.

"I'm going to lay down and watch the [later quarterfinal] match and see what's going on. Either way, it's not an easy match."

For Nadal, he is now two wins shy of becoming only the second player outside great Aussie legend Rod Laver to win each Grand Slam twice. Seven years ago, Nadal beat his longtime rival Federer in five sets, a loss that left the Swiss great sobbing during the on-court ceremony.

Only once since then have these two legends clashed in a major final, a drought that could end Sunday.

Nadal breezes past Raonic to reach semis
Rafael Nadal gets past Milos Raonic in straight sets to advance to the semifinals of the Australian Open.