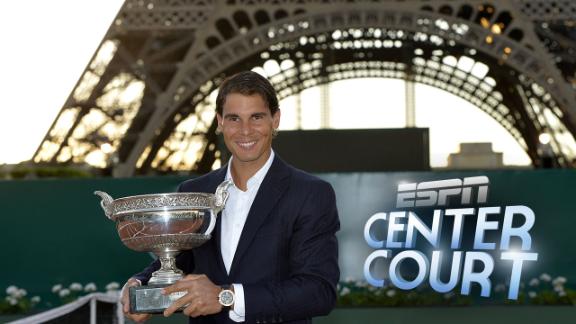 PARIS -- Rafael Nadal's path to a record-extending ninth French Open title could take him through a series of matches against the men who beat him on clay this season.

The top-seeded Nadal was drawn Friday to possibly face No. 21 Nicolas Almagro in the fourth round, then No. 5 David Ferrer in the quarterfinals.

"Those are opponents that know how to play well on clay," Nadal said. "But it's never easy."

The other men's quarterfinal matchups could be No. 2 Novak Djokovic vs. No. 8 Milos Raonic, No. 3 Stan Wawrinka vs. No. 7 Andy Murray and No. 4 Roger Federer vs. No. 6 Tomas Berdych.

The possible women's quarterfinals are No. 1 Serena Williams vs. No. 7 Maria Sharapova in what would be a rematch of last year's final won by Williams, No. 2 Li Na vs. No. 6 Jelena Jankovic, No. 3 Agnieszka Radwanska vs. No. 8 Angelique Kerber and No. 4 Simona Halep vs. No. 5 Petra Kvitova.

Ferrer, who lost to Nadal in the 2013 final at Roland Garros, upset him in the Monte Carlo quarterfinals last month. Almagro ended Nadal's 41-match winning streak in Barcelona by beating him in the quarterfinals there a week later.

Those defeats were both in best-of-three-set matches. The French Open, like all Grand Slam tournaments, uses a best-of-five format for men, and Nadal was asked Friday whether that gives him an advantage on clay.

"I give my most every point, every game, every set. Whether it's [best of] three or five, if you want to win, you have to play well," he said.

Nadal has three losses on clay in a season for the first time since 2004, when he was 17 and had yet to play a match at the French Open. He was beaten in the Rome final last weekend by Djokovic; they only could meet in the final in Paris.

Djokovic has won the past four meetings between the two, but Nadal is 5-0 head-to-head at the French Open, including victories in the 2012 final and 2013 semifinals.

Djokovic, a six-time major champion who needs a French Open title to complete a career Grand Slam, and Federer, owner of a record 17 major titles, were drawn to meet in the semifinals. Nadal, who stands third among men with 13 Grand Slam trophies, could meet Australian Open champion Wawrinka in the semifinals.

Williams won the clay-court Grand Slam tournament in 2002, beating her older sister Venus in the final, then waited 11 years before adding a second French Open trophy in 2013.

The Williams sisters were drawn Friday to potentially face each other in the third round, which would be their earliest meeting at a Grand Slam tournament since their first matchup, in the second round of the 1998 Australian Open.

"It never gets easier," Serena said. "She's essentially the love of my life, so it's definitely difficult."

Center Court: French Open Men's Draw
Prim Siripipat talks to Howard Bryant, who breaks down the 2014 French Open men's draw and discusses who has a chance of upsetting Rafael Nadal.

Center Court: French Open Women's Draw
Prim Siripipat talks to Howard Bryant, who breaks down the 2014 French Open women's draw and discusses who has a chance of upsetting Serena Williams.

Center Court: King Of Clay No More?
Prim Siripipat talks to ESPN senior writer Greg Garber about Rafael Nadal's recent issues on clay and his chances in the French Open.

Center Court: Serena On Clay
Prim Siripipat talks to ESPN senior writer Greg Garber about Serena Williams' return from thigh injury and how she's been able to come back so sharp.