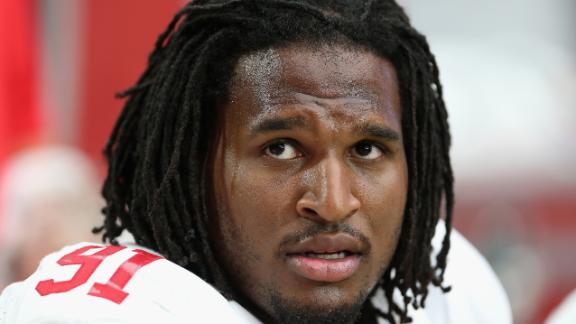 "I have no malice toward anyone," McDonald said Tuesday, a day after the Santa Clara County district attorney's office announced it declined to file charges against him in an investigation stemming from his Aug. 31 arrest. "I feel like I'm a good guy, a teddy bear."

McDonald said he's ready to move forward after spending weeks having his focus divided between football and his off-field activities.

"I'm not the kind of guy to put a hand on a woman like that,'' McDonald said. "I respect women and the truth came out. It was weighing on me because a lot of things were being said about me that I knew weren't true. I just kept my mouth shut and let the process play out.''

McDonald was arrested on Aug. 31 on felony domestic violence charges after an incident that occurred at his San Jose home. A police report noted "visible injuries" to an alleged victim, who was not identified by police but is believed to be McDonald's fiance. McDonald posted $25,000 bail and was released from police custody several hours after the arrest.

Lindsay Walsh, Santa Clara Deputy District Attorney in charge of the case, said Monday that McDonald was cooperative with officers on the night of the incident and gave a follow-up interview later.

"He was cooperative," she said. "He spoke to responding officers that night and gave a recorded statement. He also gave a follow-up interview with San Jose Police detectives. He allowed them to come into his home."

The DA's office cited "a significant lack of cooperation by Jane Doe" as a contributing factor in the decision. After the night in question, she declined to speak with investigators.

According to Walsh, McDonald's fiance "never used the words 'choking,' 'grabbing,' 'punching'" -- "anything of that nature" during her interview with police. When police attempted to interview her two days later and take additional photographs, she refused.

McDonald has played all season despite pressure on the 49ers to not play him. He has 24 tackles, 15 solo, while starting all nine games for the 49ers (5-4), who travel to play the New York Giants on Sunday.

"I want to move past it and focus on the game this week,'' he said. "My team had faith in me. My friends, family and coaches all know what kind of guy I am.''

McDonald and his fiancee remain together and are working to strengthen their relationship.

"We love each other,'' McDonald said. "It was one of those things that happen and it got thrown out to the public. When it's on the national stage, you have no choice but to learn from it. We don't want to put ourselves into situations like that again.''

ESPN.com's Tim Keown and The Associated Press contributed to this report.

The Apologies Owed In The Ray McDonald Case
In the Ray McDonald case, the 49ers and the San Jose PD owe the local community and the women of this country an apology. Keith Olbermann explains.