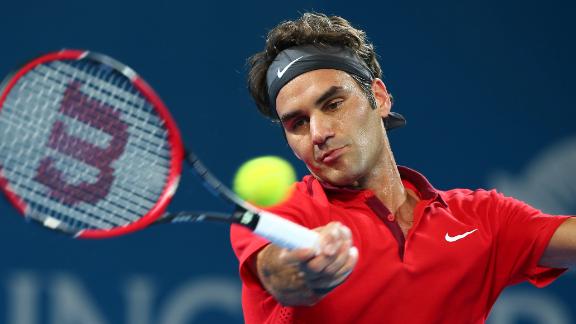 "Clearly it's a special day for me, winning a title plus getting to the magic number of 1,000," Federer said after his 6-4, 6-7 (2), 6-4 win against third-seeded Raonic. "It feels very different to any other match I've ever won. All those [milestone] numbers didn't mean anything to me, but for some reason 1,000 means a lot because it's such a huge number. Just alone to count to 1,000 is going to take a while."

Federer clearly wanted to reach the milestone before the Australian Open, breaking Raonic's serve in the third game and again in the opening game of the second set. He fired eight of his eventual 21 aces in the first set, taking on the big-serving Canadian's strength. Just as it appeared Federer would coast to a comfortable victory, though, Raonic shook off his nerves to break back in the fourth game of the second set and swing the momentum.

Federer had another half-chance to clinch it in two, getting an early mini-break in the tiebreaker, but Raonic went on a roll to win seven straight points and level the match.

The 33-year-old Swiss star responded by serving an ace to open the third set, but he needed all his experience to save three break-point chances in that lengthy game.

Tension continued to build as Raonic was forced to save two break points in each of the fourth and sixth games, and missed two chances on Federer's serve in the fifth.

Only one point went against serve in the next three games until Raonic was serving to stay in the match. He was leading 30-15 when Federer produced a pinpoint topspin lob that forced an error, and then came a double-fault -- Raonic's first of the set and fourth of the match -- to give Federer a championship point.

Raonic netted a forehand on the next point, and Federer raised his arms to acknowledge the "Federer 1,000" placards and red-and-white Swiss flags being waved around Pat Rafter Arena.

"Looking back it's almost nicer winning this way through a tight match with nerves and humid conditions against a great player in a final," Federer said. "It means so much more than just running away with it. I guess I was much more happy having to go three sets in the end."

Raonic said he did everything he could but didn't quite have the answer to beat Federer for the second time in their eight head-to-heads. Still, he didn't mind being part of the big occasion.

Ball boys held up "1,000" in big, white numerals near the net during the presentation ceremony, when Federer accepted mementos from Australian tennis greats Roy Emerson and Rod Laver: the Roy Emerson Trophy and, from Laver, a framed montage of images with the words "Congratulations Roger, 1,000 match wins."

In a career of so many milestones, Federer welcomed another and was glad to get it done before the season-opening major.

He hasn't added to his collection of Grand Slam titles since his 2012 Wimbledon triumph, but showed no signs of slowing down last year by finishing No. 2 in the rankings, helping Switzerland to its first Davis Cup crown and finishing the season with five titles and a 73-12 record.

Federer said he hasn't got Connors' record number of wins in his sights yet, but he does have ambitions to win more major titles. That quest recommences Jan. 19 at Melbourne Park, where he hasn't returned to the final since winning the last of his four Australian Open titles in 2010.

"Yeah, I do believe that," he said. "Clearly I do believe I have a shot in Melbourne; otherwise, I would go home."