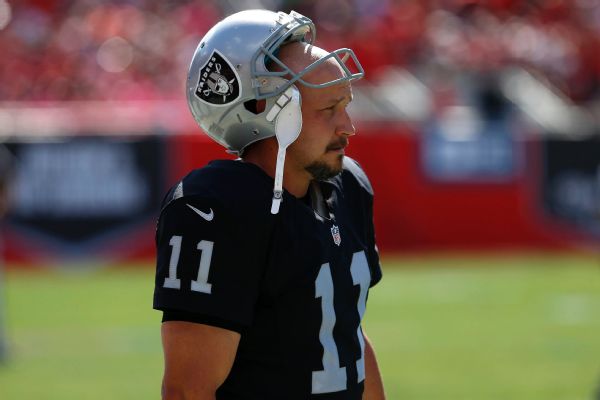 Place-kickerSebastian Janikowskiand the Oakland Raidershave resolved their contractual differences, and he will remain with the team, sources told ESPN's Adam Schefter on Wednesday night.

Janikowski's contract has been reworked and it's no longer an issue, the sources said.

On Tuesday, Janikowski, the Raiders' longest-tenured player, was guaranteed the $238,000 Week 1 pay of his $4.05 million salary when he remained on the roster. The Raiders had wanted Janikowski -- the franchise's all-time leading scorer -- to take a pay cut, something he had declined, a source familiar with the situation had told Schefter.

Janikowski, 39, is purportedly dealing with a back injury that kept him out of the Raiders' final two exhibition games.

Janikowski said during mandatory minicamp in June that he wanted to kick for the Raiders when they move to Las Vegas in 2020.

And when asked how long he wanted to kick for the Raiders, he said, "Until they kick me out."

Janikowski's 1,799 points are the 10th most in NFL history, and his 268 games and 17 seasons played are Raiders records. In 2011, his 63-yard field goal atDenvertied the record for longest in league history at the time. He has converted 80.4 percent of his career field goal attempts and 98.9 percent of his extra point attempts.

His 55 field goals of at least 50 yards are an NFL record.