Serena Williams cruises into third round of French Open 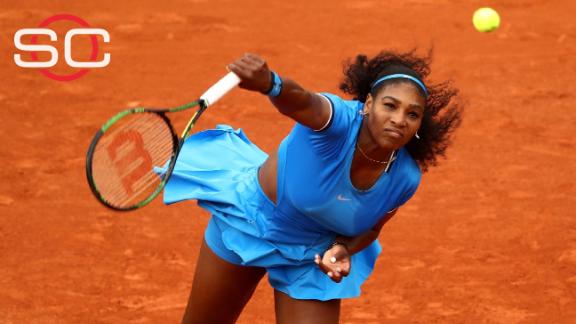 PARIS -- Defending champion Serena Williams picked up a quick, clean victory to reach the third round of the French Open on Thursday.

In the first set, Williams had 22 of those winners and only three unforced errors.

Meanwhile,Venus Williams also reached the third round for the first time since 2010 as the seven-time major champion, seeded ninth in Paris, overpowered 20-year-old American qualifier Louisa Chirico 6-2, 6-1 in 54 minutes.

Venus, who turns 36 next month, was the runner-up to her younger sister Serena at the 2002 French Open but hasn't enjoyed much success at Roland Garros lately -- losing in the first or second round every year from 2012-15, and missing the tournament in 2011.

The siblings potentially could face each other in the semifinals.

In another match, Kiki Bertens extended her winning run to nine matches to reach the third round with a 6-4, 6-1 victory over Camila Giorgi.

Bertens, who upset Australian Open champion Angelique Kerber in the previous round, won the Nuremberg tournament last week as a qualifier.

Former French Open champion Ana Ivanovic reached the third round, too, hitting 35 winners in a 7-5, 6-1 win over Kurumi Nara.

"When I'm in a good position, I feel I strike it much better," said Ivanovic, who won in Paris in 2008. "Today that was the case. And I knew I had to be aggressive and move well against her, also take time away from her, because she's great player."

Bacsinszky, a French Open semifinalist last year, was broken in her first service game but rebounded to beat Eugenie Bouchard 6-4, 6-4.

Trailing 5-0 in the second set and with Bacsinszky serving for the win, Bouchard got back into the match, saving a match point and earning two break points that would have leveled the score at 5-5, but she failed to convert.

After making the semifinals at Roland Garros in 2014, Bouchard lost in the first round last year. From a career-high year-end ranking of seventh, the 22-year-old Canadian slipped out of the top 40 in 2015 and struggled with an eating disorder she says she has since conquered.

Bouchard attributed her early exit to her mind more than her tennis, saying "tennis is 90 percent mental" and that "the brain is like a muscle" that needs workouts. The 47th-ranked Canadian said her mentality used to be "my amazing strength" and that "I feel like I've not used that as much in the past year or so."

In doubles action, defending championsBethanie Mattek-Sands and Lucie Safarova, the No. 2 seed, were eliminated in the first round Thursday byKiki Bertens and Johanna Larsson 6-4, 6-3.