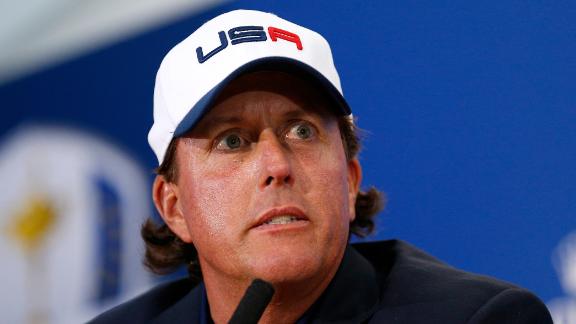 Phil Mickelson's candid and blunt assessment of U.S. Ryder Cup fortunes Sunday night at Gleneagles was in response to, among other things, captain Tom Watson's approach to what was supposed to be a Saturday night team-bonding session that turned ugly, sources told ESPN.com this week.

"You could have heard a pin drop in that room,'' one of those in attendance said. "He was pissed. It all went from there.''

The U.S. lost 16-11 to the Europeans at Gleneagles, the eighth American defeat in the past 10 Ryder Cups. Watson, the last U.S. captain to win on European soil in 1993, was brought back for a second try, his appointment championed as new thinking for the PGA of America, which had not gone with a repeat captain since Jack Nicklausin 1987. But Watson was criticized for failing to get to know his players, for his communication skills, for his pairings and ultimately for the way he handled discussions with the team.

Attempts to reach Watson through the PGA of America, which is responsible for the Ryder Cup and picking the U.S. captain, were unsuccessful Friday afternoon.

After the team's defeat Sunday night, Mickelson, although not by name, called out Watson in the media session, which included all 12 players and Watson sitting at the dais in the middle.

"Nobody here was in [on] any decision,'' Mickelson said at one point, and lauded the system used by captain Paul Azingerduring the Americans' Ryder Cup win in 2008. "Unfortunately, we have strayed from a winning formula in 2008 for the last three Ryder Cups, and we need to consider maybe getting back to that formula that helped us play our best."

A night earlier, the U.S. had fallen behind 10-6 after a horrific afternoon in foursomes (alternate shot), in which it won just a half-point out of four. Earlier, much to their surprise, Mickelson and regular partner Keegan Bradley were told they would not be playing in the afternoon after also sitting out the morning session. It was the first time in 10 Ryder Cup appearances that Mickelson, 44, had sat out an entire session.

Given Mickelson's stature in the game as well as the fact that he and Bradley were 4-1 as a team in the Ryder Cup (not to mention 2-1-1 at the Presidents Cup), most expected them to be in the lineup, perhaps in place of Rickie Fowler and Jimmy Walker, who had just seen their third straight match go to the 18th hole, all ending in ties. But despite Mickelson's attempts to talk his way into playing, Watson held firm.

Things blew up after the Americans performed so poorly that Saturday afternoon. Fowler and Walker, playing their fourth match, lost to the rested European team of Graeme McDowell and Victor Dubuisson, 5 and 4.

Despite the 10-6 deficit, the U.S. team was fairly upbeat Saturday evening looking ahead to the Sunday singles, the pairings for which had just been announced. Fresh in the players' minds was the fact that Europe had come back from the same margin two years earlier at Medinah. And two players in the room, Mickelson and Jim Furyk, were on the 1999 U.S. team that also came back from that score on the final day at The Country Club in Brookline.

They gathered in the team room that night -- a hotel ballroom at the lavish Gleneagles Hotel with TVs, ping-pong tables, food and drink. They were joined by their wives or girlfriends (except for Fowler), as well as their caddies and their significant others. Some of the hotel staff were in the room, as were a few members of the PGA of America staff. In all, more than 40 people were there when Watson returned to the team room after speaking to the media about the Sunday pairings.

Watson started by saying, according to all of the sources: "You stink at foursomes.''

After praising the rookie team of Patrick Reed and Jordan Spieth, Watson went through the Sunday singles pairings and ridiculed several members of the European side as he went through the matchups. Soon after, Watson was presented a gift by Furyk, a replica of the Ryder Cup trophy that was signed by every member of the team. Instead of thanking them, the sources said Watson said the gift meant nothing to him if the players didn't get the real Ryder Cup on Sunday and that he wanted to be holding it aloft on the green in victory.

Said one of the sources: "That's almost verbatim. He said it basically means nothing to me.''

Added another: "It was fairly shocking that he treated this thoughtful gift with such disdain.''

When Watson was done, other players, as is standard, were invited to speak, and several did, as well as assistant captains Andy North, Raymond Floydand Steve Stricker. (North also works as an ESPN golf commentator.) Mickelson went last, and he came to the front of the room, then sat in a chair with his back to Watson while he addressed the team, telling it, among other things, that he felt good about a comeback.

"Phil went player by player and told a story about each one," one source in the room said. "It changed the tenor of the room from completely negative and heads down to 'Let's give this a go tomorrow.' He gave almost 180 degrees difference than what Tom did.''

The comeback fell short, as the U.S. earned just 5 of the 8 points it needed for the comeback.

According to three witnesses, Watson greeted several of the singles losers Sunday, including Bradley, by telling them they should have played better.

Amid all the postmortems, Mickelson offered a stinging rebuttal to the captaincy of the eight-time major champion Watson, who became the oldest captain in Ryder Cup history. When things got a bit testy in the interview room due to Mickelson's comments, Watson attempted to dismiss the obvious tension by saying, "My management philosophy is different than his.''

Watson also disagreed with the Azinger method, saying, "It takes 12 players to win. It's not pods.''

But Mickelson had made his point.

Said one of the sources: "[Mickelson] was trying to lead the team and protect the team there when he put himself under the gun pretty good on Sunday night. He did that for a lot of people.''