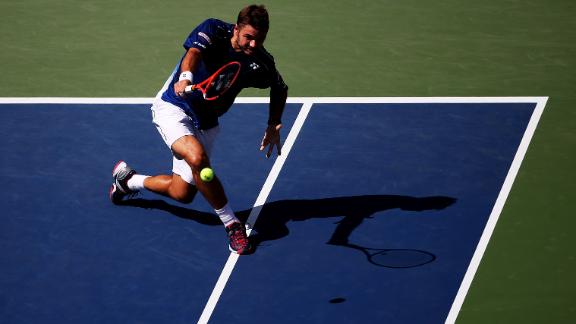 NEW YORK -- For the first time this fortnight, there was no three-set comeback from American Donald Young.

After improbably winning the last three sets in each of his first three matches at the US Open, Young didn't have an answer Monday afternoon in a 6-4, 1-6, 6-3, 6-4 loss to No. 5 seed Stan Wawrinka.

A spirited and supportive crowd in Arthur Ashe Stadium did its best to will Young to victory during the 2-hour, 9-minute match.

Wawrinka is the reigning French Open champion and has won two of the past seven Grand Slam singles titles, more than anyone besides Novak Djokovic, who has three in that span.

Afterward, Wawrinka acknowledged that the quick second set -- and cracking his racket on the subsequent changeover -- was the turning point.

"I think I calmed down a little bit," Wawrinka said in his on-court interview. "The set was quick, and I was not really there mentally. I tried to be a little bit more aggressive, move a little better.

Next up for Wawrinka in his third consecutive US Open quarterfinal: the winner of the Andy Murray-Kevin Anderson match later Monday.

With Serena Williams' historic run at a calendar-year Grand Slam, many of the men's storylines have been overlooked. Young, who has never been to the quarterfinals of a major, had a terrific run.

The 26-year-old won the first two matches of his 11-year career after trailing two sets to love.

Young did it in the opening round against No. 11 seed Gilles Simon and again in the third against No. 22 Viktor Troicki. The 2007 Wimbledon junior champion, at the age of 17, was criticized early in his career for not putting in the effort and sacrifice required of a champion -- and these wins underlined the progress he has made in the areas of work ethic and fitness.

Young reached the fourth round here for only the second time in his career.

This 2015 season has been a microcosm of his uneven life as a professional. Young is now 20-20 for the year despite weathering a 0-for-9 losing streak that saw him go more than four months without a victory. In 2012, Young famously lost 17 straight matches at the ATP level over six fruitless months.

Young and Wawrinka had split two previous matches, with Young, as a wild card, winning a five-set thriller four years ago in the second round here. In that match, he prevailed by winning tiebreakers in the first and fifth sets.

While both players are listed at 6-feet, with Wawrinka four pounds heavier, at 179, the Swiss player generates far more power. That was an important factor in his victory. Wawrinka averaged eight more mph on his first serve and held a decisive advantage in winners, 52-14.

Perhaps more telling, Wawrinka converted all four of his opportunities to break Young's serve. Meanwhile, Young was 3-for-6.