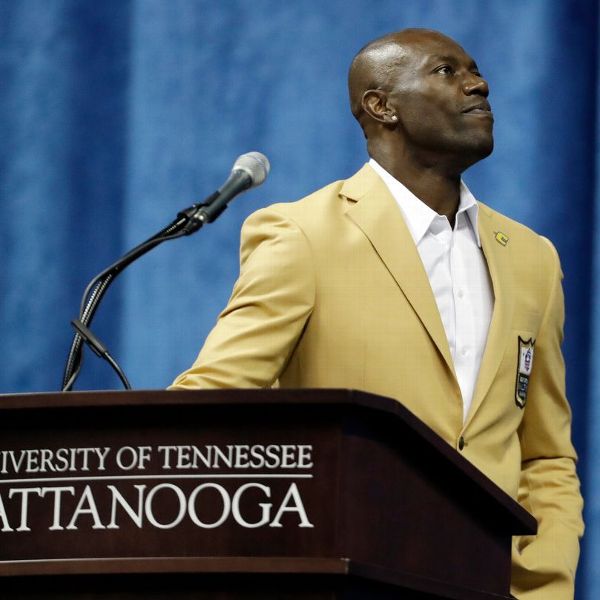 CHATTANOOGA, Tenn. -- Former NFL wide receiver Terrell Owens delivered an emotional, 40-minute speech at his former college, the University of Tennessee-Chattanooga, during which he reiterated why he skipped this weekend's Hall of Fame ceremonies and acknowledged Jerry Rice, Michael Jordan and Kobe Bryant as athletic inspirations.

Owens, 44, elected to the Hall of Fame in his third time on the ballot, again criticized what he called a "flawed'' voting process.

"There's been a lot of speculation and false reports as to why I chose not to be there,'' Owens said of the Canton, Ohio-based Hall. "I would like to set the record straight: It's not because how many times it took me to be voted to the Hall. It's about the mere fact that the sportswriters are not in alignment with the mission and the core values of the Hall of Fame.''

Sherman presented Owens with his gold Hall of Fame jacket, brought to town by a friend who traveled in from Canton.

Owens became emotional when talking about his mother, Marilyn Owens Heard, and late grandmother, Alice Black. He said his mother lifted his spirits when he was bypassed by the Hall of Fame twice.

"And when they ostracized me and tried to keep me from what I rightfully earned not once but twice, I remember the text,'' Owens said, referring to his mother. "You texted me and said, 'You ain't got to worry about nothing. You were always a Hall of Famer to me.' But Mama, you are the real Hall of Famer.''

Owens said he'd like to start a conversation for change with the Hall of Fame voting process.There are 48 selectors, with two members of the Hall of Fame and the rest media members. Once the process is whittled down to the top five, a candidate needs 80 percent of the vote.

"I wanted to take a stand so the next guy coming after me will not have to go through what I and others have gone through,'' Owens said. "Whether it is three years or 45 years, you should get what you rightfully earned. It is not always a popular stance to go against the grain. However, in my heart, I know that this is the right thing to do. They say that I am making the wrong decision, but sometimes, got to do what is deemed wrong or the wrong thing for the right reasons.''

Owens acknowledged his fellow members of the 2018 Hall of Fame class, who were inducted in Canton on Saturday.

"To my fellow Hall of Famer members -- Bob Bethard, Robert Brazille, Brian Dawkins, Jerry Kramer, Ray Lewis, Brian Urlacher and 'The Freak' Randy Moss -- I want to say congratulations to you guys,'' Owens said. "I have already reached out to you guys individually, and I expressed, and I will express it again, my utmost respect for each of you and for what we have accomplished. We are eight of 318 of the greatest players to ever play the game, and that's truly amazing.''

Owens told the media after his speech that, at first, the Hall of Fame wasn't going to give him his gold jacket ahead of time unless he was there. They were going to mail it to him Saturday. His friend, whom he referred to as Dave Brown and who also is friends with Lewis, brought it from Canton.

"I wasn't really too pleased about it,'' Owens said of the Hall of Fame's initial reaction regarding the jacket. "But we made it work."

Owens was a third-round draft pick of San Francisco in 1996. He played eight seasons with the 49ers, two with the Eagles, three with the Cowboys and one each with the Bills and Bengals. The six-time Pro Bowler compiled 15,934 receiving yards and 153 receiving touchdowns on 1,078 career receptions.

He acknowledged each of his NFL teams during the speech and was critical of media members who labeled him a selfish and bad teammate, particularly during his days with the Eagles. He portrayed himself as misunderstood.

Owens also dropped some humor when a fan yelled out, "I love you, T.O.'' 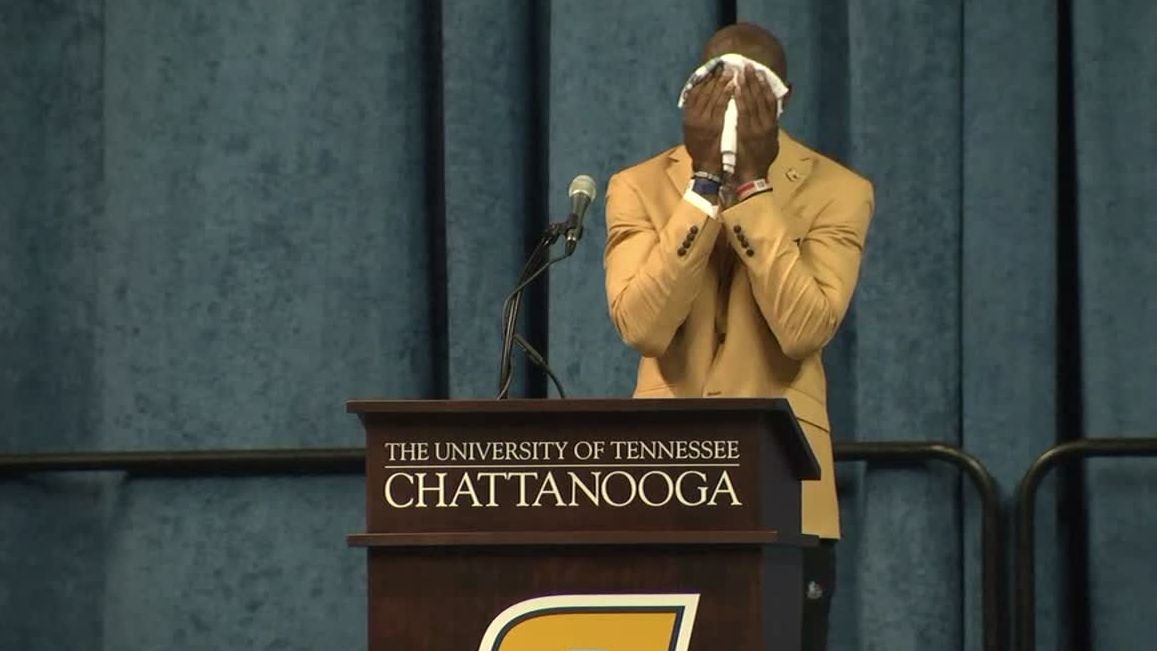