Tiger Woods: Best round since return 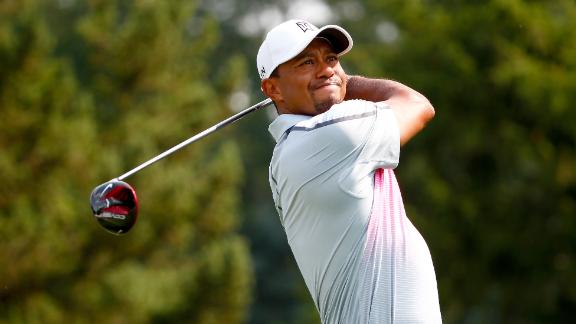 AKRON, Ohio -- Four months to the day after back surgery, Tiger Woods returned to friendly turf at Firestone Country Club, shooting a 2-under-par 68 in the first round of the WGC-Bridgestone Invitational.

It was his seventh official round since returning a month ago at the Quicken Loans, but it was his best to date, surpassing by one stroke his 69 in the opening round of the Open Championship at Royal Liverpool two weeks ago.

"Overall, I was very pleased with today,'' said Woods, who is four shots behind first-round leader Marc Leishman and in a tie for ninth. "I hit a lot of good shots.

"I dropped shots at three holes out there today, got it right back on the very next hole. That was nice to have three good bounce-backs. Overall, it was a good, solid day.''

Woods is the defending champion at Firestone, where he has won eight times in 15 previous tries, including the last of his 79 PGA Tour titles a year ago. He shot a second-round 61 that week and finished the tournament 15-under par, winning by seven strokes. It was his fifth victory of the year.

Not much has gone right since. Woods had one of his worst 72-hole finishes in a major championship at the PGA a week later, tried to manage more-serious-than-disclosed back issues through the rest of 2013, then played just four times this year before March 31 surgery.

He missed the cut at the Quicken Loans, was 69th at the Open -- his worst 72-hole finish as a pro in a major -- and now is looking at a last-ditch shot at qualifying for the FedEx Cup playoffs as well as impressing U.S. Ryder Cup captain Tom Watson to garner an at-large pick.

Woods made six birdies, including five in the first 10 holes. But he bogeyed the first hole when he 3-putted from 10 feet, made another bogey at the fourth when he missed the green and couldn't get it up and down, then hit a poor drive at the ninth, left his second shot in the trees, and made a double-bogey.

"I got a little ticked out there today because I know what I can do, and I know the shots that I need to hit, and I know I need to place the ball, and I didn't do it a couple times,'' he said. "And I didn't take advantage of some of the iron shots I had in there, too.

"Granted, I did have two kick-ins (close iron shots at the 5th and 8th). Even you and (caddie) Joey (LaCava) could have made those two. So it was nice to have that, but more importantly, to have to be able to go 3 for 3 on the bounce-backs, that was nice.''

Woods played with U.S. Open champion Martin Kaymer, who shot 77. Woods hit 8 of 14 fairways, badly missing twice with his driver, one leading to the double-bogey on the ninth. He hit 12 greens and had 28 putts. He and Kaymer begin the second round at 10:20 a.m. on Friday.