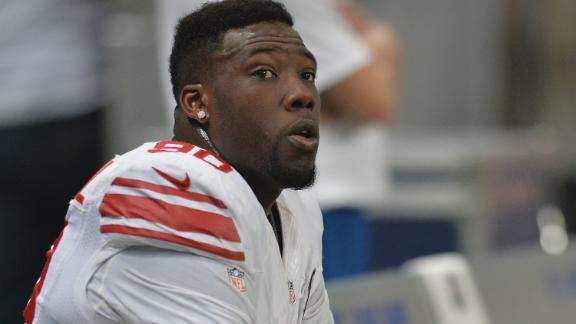 EAST RUTHERFORD, N.J. -- Jason Pierre-Paul was back at New York Giants practice Wednesday for the first time since damaging his hand in a July 4 fireworks accident.

Having passed a physical Monday and signed a new contract with the Giants on Tuesday, Pierre-Paul joined his teammates for their regular Wednesday morning meetings, then stretched with the team during the early portion of practice before working on the side with trainers for the rest of the session.

It remains to be seen when Pierre-Paul will be able to play. Sources have said the Giants are hoping he could return in either Week 10 or Week 12 (they have a bye in Week 11), but it will depend on how his practices and conditioning go in the meantime. Coach Tom Coughlin was upbeat and optimistic Wednesday morning about Pierre-Paul's condition and said he's hopeful the defensive end will be as good as he was before the injury.

"He's been working, and we'll see how fast this comes along," Coughlin said. "He's excited about being here. He's anxious to get started. We're all rooting for him."

Coughlin said Pierre-Paul weighs 268 pounds, which is about 10 pounds less than his playing weight last season -- something of a surprise considering how limited his conditioning work must have been this summer during time he couldn't use his right hand.

As for what kind of player Pierre-Paul could be post-injury, Coughlin said the defender has always used his right hand to "club" instead of to grab, so he believes he can do the same things he used to do. A Giants pass rush with nine sacks in seven games could use that, though it remains to be seen how realistic it is for Pierre-Paul to return to pre-injury form.

Wednesday was Pierre-Paul's first day with the Giants since Week 17 of last year. He skipped this year's offseason program after the team elected to use a franchise tag rather than sign him to a long-term contract, and he stayed away after the July 4 incident with his franchise tender unsigned.

Eli: Good to have JPP back
Giants QB Eli Manning addresses the return of DE Jason Pierre-Paul to the team.