Tom Watson on Masters decision: Golf course too big for me 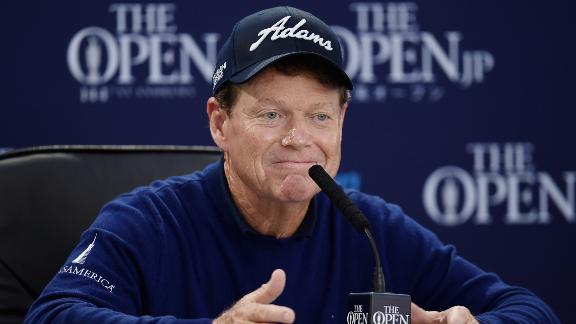 "The golf course is too big for me, and with my declining skills and length, I won't be playing that," said Watson, who hasn't made the Masters cut since 2010. "The toolbox is kind of half-empty with the tools I used to be able to play good golf. Those tools are missing right now, or pretty rusty -- rusty like me."

This news comes on the heels of Watson playing in his last Open this week -- unless the 65-year-old finds a little magic on the Old Course.

"It would be nice if I ended up in the top 10, to be able to extend five more years," he said. "I don't foresee that, although I'm playing pretty well.

During a long pre-tournament news conference Wednesday, Watson often waxed poetically about his golfing mortality, philosophizing on the impending end of a career that saw him claim eight major championship titles.

"Over the years, I've made my share of wrong decisions, but do I have regrets? The only regret I have is that it's the end," he said. "It really is. It's the end. It's 40 years. It's the end. And I regret I don't have the tools in the toolbox to be able to continue on.

"It's a little bit like death. The finality of the end is here. But what tempers that very much are the memories and the people I've met along the way."

Watson's time in the interview room wasn't without a little controversy.

"That was a disappointment to me," he said. "Phil was very disappointed about not being able to play. It was just kind of sour grapes. That's understandable, and we just got waxed, the whole team, and the disappointment was just there."

As for his relationship now with Mickelson, Watson maintained, "We're cordial. I saw him [Tuesday] night, we said hello and, yeah, we're fine."