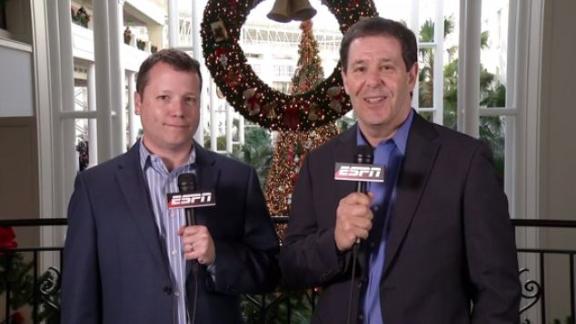 NASHVILLE, Tenn. -- An unidentified fourth team is making a "very strong" bid to trade for Miami Marlins ace Jose Fernandez, sources told ESPN. Other clubs say they believe that mystery team is the Houston Astros, but neither team would confirm that Tuesday morning.

The Los Angeles Dodgers, Arizona Diamondbacks and New York Yankees are all known to have spoken about Fernandez with the Marlins, who have said publicly that their ace is unavailable, even while they continue to entertain trade talks about the 23-year-old right-hander.

The Astros would make sense as a trade partner because of Fernandez's age and relatively low salary as a first-time arbitration-eligible player, along with Houston's depth of prospects and young players already in the major leagues.

"He's not available," Hill told the Miami Herald on Monday. "We haven't made him available. But it doesn't stop the phone calls from coming."

Sources, however, said the team felt it was making progress toward a trade with an unidentified club. On Tuesday, sources who had previously described any deal as being unlikely were no longer willing to say that.

Another source said the Marlins had set aside talks to trade center fielder Marcell Ozuna until they determine whether they can get an outfielder in a trade for Fernandez, who is 22-9 with a 2.40 ERA and 336 strikeoutsin 47 major league starts.