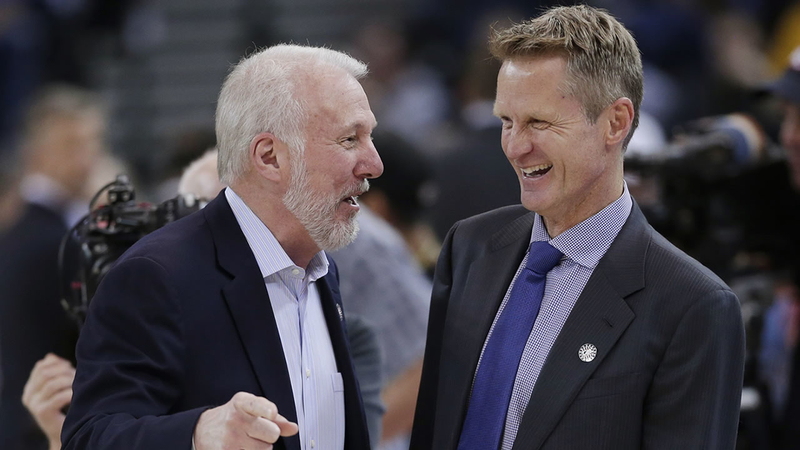 "Erin has been courageously fighting a battle with some health issues over the last few years but this was shocking, it was unexpected," he said.

Kerr played for Popovich and says he and his wife Margot were close to their family.

RELATED: Spurs coach to miss Game 3 against Warriors after death of his wife

"Pops is one of the finest human beings I know and he's had an incredible impact on my life," adding with a laugh, "Erin was sort of the balance that Pop needed. I still remember when he traded me to Portland in 2001. He called me up to tell me the news. He said, 'I don't think I can go home cause Erin's going to be so mad at me for trading you.'"

The Warriors coach was too distraught to talk on Wednesday after learning of the news, and was still full of emotion the next day.

"She's dealt with a lot over the last few years, health wise, and has been very courageous in her battle," he said. "We all grieve and at the same time try to celebrate her life and her legacy."

The Warriors coach considers Popovich a mentor and says it's been a tough few days for him and his team.

As you can imagine, Kerr was shocked when he heard the news. He told reporters that he's texted with Popovich, but has not spoken with him.

"Pop might be one of the most admired man in the NBA for many reasons and there's an outpouring of support and grief from everybody around the league," said Kerr. "But it hits home, especially for those of us who were a part of this Spurs family and have been so impacted by Pop and Erin over the years, so it's a tough day."

Was extremely saddened last night to learn about the passing of Erin Popovich. All my thoughts and prayers are with Coach Pop, his family, and the entire Spurs family. Rest In peace.

Popovich did not coach the team at home Thursday night in Game 3 against Golden State following the death of his wife.

Ettore Messina, a Spurs assistant since 2014, coached the team. San Antonio lost the first two games of the first-round playoff series on the road. They lost to the Warriors in Game 3 at home as well.