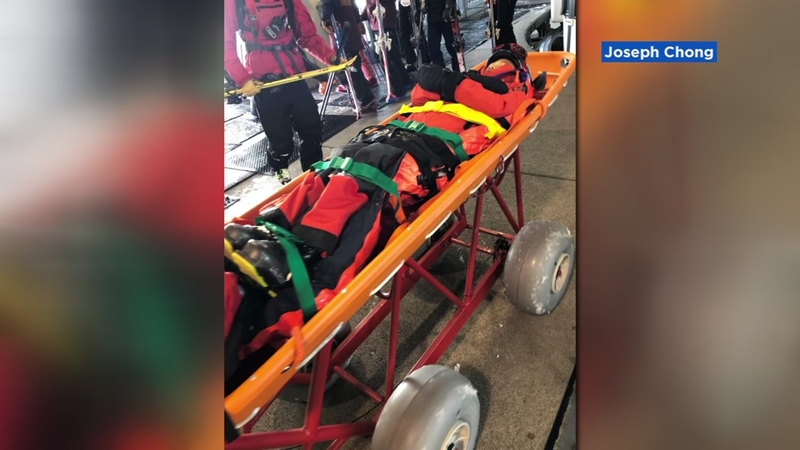 OLYMPIC VALLEY, Calif. (KGO) -- A San Francisco boy was seriously injured after a skiing accident at Squaw Valley. The boy and his family are upset about how the popular Tahoe resort handled the incident.

"The waist piece is velcro-able," said 10-year-old Nolan Chong about his temporary back brace, that he needs after a ski accident left him with two compression fractures in his vertebrae. "A boy like smashed into me and knocked the wind out of me, and then I was laying down and my dad rushed over."

Nolan was skiing with his Dad on New Years Eve on a black diamond run, when a 13-year-old member of the Squaw Valley ski team, crashed into him.

"Seeing your child getting barreled into at high speed, I was incredibly shocked, scared for his life," said Joseph Chong.

Joseph saw the 13-year-old speed down the hill with a friend, before he crashed into his son.

According to doctors, Nolan may deal with some permanent height loss.

"I'm not that tall to begin with and if I'm even shorter, that just kind of upsets me," said Nolan.

Joseph is upset too.

"Clearly it was an accident, but very preventable. I think there was negligence and recklessness on the part of the other two boys. I think they knew better, they were trained better," he said.

Mountain safety code is prominently featured on Squaw's website. The number one rule is to "always stay in control and be able to stop or avoid other people or objects."

As part of a lengthy statement, Squaw said that based on a ski patrol witness, they concluded "that this collision was not caused by reckless skiing, but rather was an unfortunate example of the inherent risk that all skiers and riders take on when they approach any ski slope."

Squaw says the 13-year-old's pass was suspended, though Joseph said for only a week.

It's a punishment that Nolan says is unfair based on the severity of his injury.

"For the kid that hit me to only just have a week taken away, because that doesn't seem that bad, and I have to lose a season of two basketball teams."

Nolan and Joseph both say they'd like to see Squaw ramp up the ski patrol presence on the mountain and police reckless skiing more proactively.

ABC7 reached out to the 13-year-old ski team member's family, but have not heard back.

Here is the full statement from Squaw Valley Resort:

We have the utmost sympathy for injured guests, and we send our best to the Chong family and hope for Nolan's speedy recovery.

The incident in question involved a collision between a 10-year-old skier and a 13-year old skier on Siberia Bowl; both skiers were skiing on expert terrain. After an investigation, our ski patrollers concluded that this collision was not caused by reckless skiing, but rather was an unfortunate example of the inherent risk that all skiers and riders take on when they approach any ski slope. Our ski patrollers have a variety of options when they evaluate the cause of collisions, from no-fault to egregiously dangerous skiing. In this case, the ski patroller who was an eyewitness to the collision, and has 30 years of experience, chose not to note reckless skiing as a factor in this collision. Had reckless skiing been identified as a contributing factor, the penalties would have been more severe than even the forceful and numerous consequences this child faced.

While skiing and riding does have inherent dangers, we put a strong emphasis on safety at Squaw Valley Alpine Meadows, and we prioritize the well-being of our guests and employees through our policies and actions on and off the hill. We are recognized industry leaders in the area of safety, as evidenced by the robust safety programming we utilize.

- We promote our "Share the Mountain" program, which educates guests on keeping 15 feet of space between themselves and other skiers and riders at all times. Signage promoting this safety initiative can be found all over the mountain.

- We maintain slow zones in high-traffic areas on the mountain. These zones are denoted by signage on the hill and are patrolled by Ski Patrol. These areas are also permanently marked on the trail maps.

- We utilize a Corrective Action policy, which is posted to the public on our website, and outlines the consequences that our guests will face if they violate our code of conduct and safety protocols. When someone is found to have violated these terms and is involved in a collision or incident, they go through resort-mandated safety education programming, and could experience suspension or expulsion from the resort.

The 13-year-old skier who was involved in this collision faced all of these consequences and more. Although he was not skiing recklessly and is extremely remorseful for his involvement in the collision, he was held to account for his actions and faced numerous consequences meant to educate him and prevent future safety violations. Immediately following the collision, he spent more than one hour with Ski Patrol discussing the Skier's Responsibility Code and how to navigate the mountain safely for himself and those around him. His pass was suspended in accordance with our guidelines. He had to watch the harrowing "Ride Another Day" safety video, created as part of the National Ski Areas Association's safety campaign, and took the accompanying safety quiz. This child is a member of our ski team community, and while he was not skiing with his team at the time of the incident, we also saw this as an opportunity not only to educate him, but for him to pass the lessons he learned along to his peers on his team. In addition to all of the standard consequences, this child was also asked to create a report on ski safety, which he will be presenting to his team when he is permitted to return to the resort.