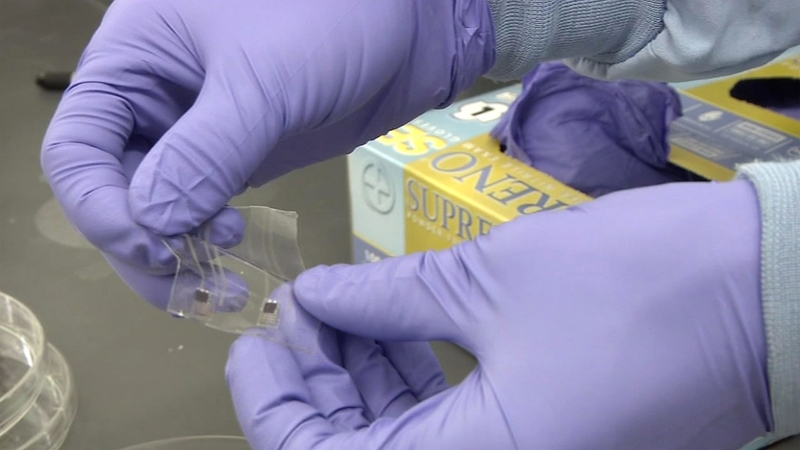 PALO ALTO, Calif. (KGO) -- When you turn on your television or pour yourself a cup of coffee, you probably don't think about the sense of touch that helped you do both. That sense is something people with artificial limbs don't have, so researchers at Stanford are now working to change that.

A light touch can easily send a signal. But creating a signal, to imitate human touch is a bigger challenge.

Researchers at Stanford have made a breakthrough with a kind of artificial skin that we first showed you two years ago. It works by integrating electrical circuits into a specialized rubber-like material that's sensitive to pressure. "When we apply small pressure there are only a few spikes are produced. Whereas when we apply larger pressure spikes are produced more frequently, which is the way the human brain encodes information from pressure," Stanford researcher Alex Chortos said.

Biochemistry professor Zhenan Bao, Ph.D., leads the project. She said what's new is a system developed by Xerox, which allowed her team to print flexible circuits evenly across a large area and mimic the nerve pathways in the skin. "So that we can convert the electrical signal sensed by the sensor into a signal the brain can understand," Bao said..

Bao's group took one more step to prove the signals can be transmitted to the brain. They teamed up with fellow Stanford researcher Karl Deisseroth, who pioneered a field called optogenetics. It involves using light to stimulate living cells. By converting their electrical signals into light, Bao's team was able stimulate living neurons in the lab. "In this work, we came up with a new concept to allow the brain to be able to communicate with our sensors," Bao said.

The team envisions a skin like surface that could someday be placed over a prosthetic hand or arm, then connected to neurons in the patient's body, which would ultimately restore the sense of touch in potentially life changing ways. "When someone uses their prosthetic limb, they'll have an indication of how much force is being applied when they're grasping something," Stanford researcher Amanda Nguyen said.

A future that may be some years off, but now seems close enough to touch.