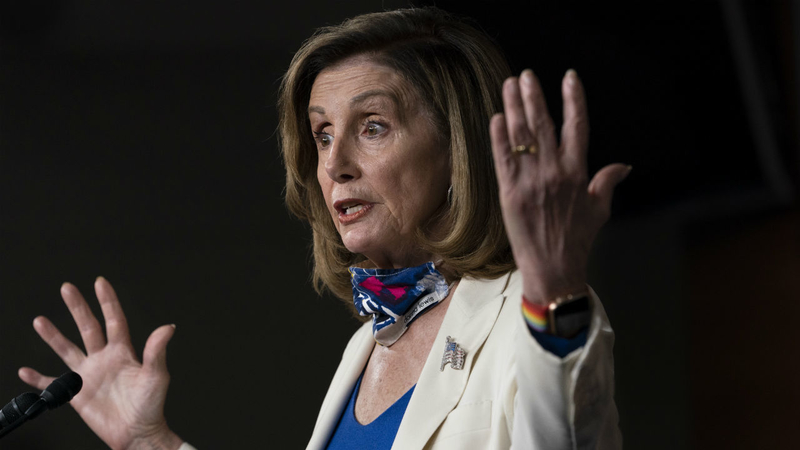 WASHINGTON -- House Speaker Nancy Pelosi said Sunday she and Treasury Secretary Steven Mnuchin must reach an agreement within 48 hours if they want to pass a coronavirus stimulus relief bill before Election Day.

"The 48 only relates to if we want to get it done before the election, which we do," Pelosi said in an interview on ABC's "This Week." "But we're saying to them we have to freeze the design on some of these things. Are we going with it or not? And what is the language."

Pelosi is putting pressure on the administration to cut a deal by Tuesday because the legislative process in the House and Senate will take time to play out, and it won't be feasible to get a bill passed through both chambers by November 3 if the talks drag on beyond the next couple days.

The CDC predicted as many as 20,000 more Americans will die from COVID-19 before Election Day as stimulus talks are stalling.

Senate Majority Leader Mitch McConnell announced on Saturday there would be votes on stimulus measures, including a stand-alone Paycheck Protection Program bill to help small businesses, on Tuesday and Wednesday. But Democrats, who are expected to block McConnell's effort, have been pushing for a larger deal, banking on on-again, off-again talks that Pelosi has had with Mnuchin for months.

Pelosi's office told CNN Sunday that the 48 hours refers to the end of the day on Tuesday and that they need answers to key outstanding questions by then or they won't be able to get a bill passed before the election. Negotiations would still continue after Tuesday if a deal isn't reached, but it wouldn't get done in time before Election Day.

The California Democrat also said during the interview with ABC the White House has watered down language Democrats have been pushing to create a national plan for Covid-19 testing and contact tracing. She also noted that the Trump administration had changed much of the language on testing and tracing after the two sides seemingly came to an agreement last week.

"They took out 55% of the language that we had there for testing and tracing," Pelosi said, and noted that they are "seeking clarity" on the details of the language.

House Speaker Nancy Pelosi unveils new legislation that would establish a panel to determine a president's fitness for office under the Constitution's 25th Amendment.

In a letter to Democratic House colleagues on Sunday, Pelosi criticized the language the Trump administration sent to House Democrats about what would be funded for coronavirus testing under a stimulus agreement.

Pelosi wrote that "while there was some encouraging news, much work remains," and said that the White House had assured them there would only be a "light touch" of editing of their language but instead there were major changes.

"The White House does not appreciate the need to direct resources to culturally competent contact tracing," Pelosi wrote. "Instead of recognizing the need for a strategic plan, they have changed words including 'shall' to 'may,' 'requirement' to 'recommendation,' and 'strategic plan' to 'strategy.'"

She continued that the changes "make the funding a slush fund for the Administration which 'may' grant or withhold rather than a prescribed, funded plan to crush the virus."

Pelosi told her colleagues that she hopes to find common ground and is optimistic that an agreement could be reached before the election.

In a call with reporters on Sunday, Senate Minority Leader Chuck Schumer blasted McConnell's plans to hold a vote Wednesday on a $500 billion coronavirus stimulus bill that Democrats blocked in September, calling it "a sham."

"It was inadequate just up and down the line on state and local funding, on testing, on the need to open schools safely, on the census, on protecting workers who need health care benefits, and I could go on and on," Schumer said during the call. "So that is just a sham. It's a stunt by Sen. McConnell when he's blocked everything that's happened so far. And in terms of getting an agreement, he's even said he wouldn't go along with what Donald Trump wanted."

Schumer added that he believes McConnell and Senate Republicans are the "number one reason" why there's currently no agreement on a relief package.

Pelosi and Mnuchin, Trump's lead negotiator, spoke Saturday evening for more than an hour. Their next conversation is expected on Monday, according to Pelosi spokesman Drew Hammill.

The Trump administration has attempted to negotiate with House Democrats, but a breakthrough has remained far out of reach throughout the course of the summer. Negotiations over a sweeping coronavirus relief package have stalled as Democrats have been pushing for a relief bill with a price tag of more than $2 trillion.

The pressure to strike a deal has become increasingly urgent with unemployment levels elevated, an epidemic of small business closures, and the end of the direct payments and enhanced unemployment insurance that helped float families and individuals throughout the pandemic-created economic shutdowns.

The pending result, according to economists, could be devastating if Congress and the Trump administration do not reach an agreement.

This story has been updated with additional background information.