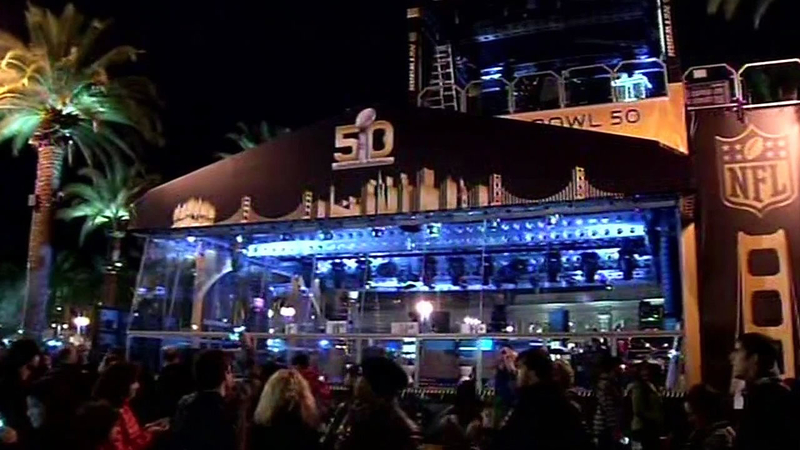 SAN FRANCISCO (KGO) -- You've probably noticed a lot of extra security around the Bay Area ahead of Super Bowl 50.

On Wednesday, federal, state and local law enforcement met with the media to convince the public that they are protected and to ask for their help. The age-old rule still applies - if you see something, say something.

Security officials at all levels held a news conference at the Moscone Center. The headliner was Secretary of Homeland Security Jeh Johnson.

"At this time, we have no specific credible threat detected at Super Bowl 50 or related events," Johnson said.

However, they are training hard in case one comes along. For example, the FBI says up to 90 K-9 units will be on duty to sniff for explosives. Dozens of bomb squad technicians will be at the ready and so will SWAT teams from several different agencies, ready to respond on specialized personnel carriers. There are even radiation detectors posted at the airport, Levi's Stadium and other venues -- and that's just what you will see.

"There's going to be so much going on behind the scenes no one is going to see," San Francisco Police Chief Greg Suhr said.

A lot of that will take place at an FBI joint operations center in an undisclosed location near Levi's Stadium where they will monitor threats, spread intelligence and coordinate response to all NFL sponsored events in the area, including to the one thing law enforcement fears the most.

"It's going to be a lone wolf or home-grown violent extremist situation at a soft target where there's a large crowd," FBI Special Agent in Charge David Johnson said.

If a lot of this sounds familiar, that's on purpose. They're hoping repetition means that people who see something will say something.