As Maternal Mental Health Week and Mother's Day approaches, we look at ways moms can take care of themselves.
KGO
By Pamela Parker 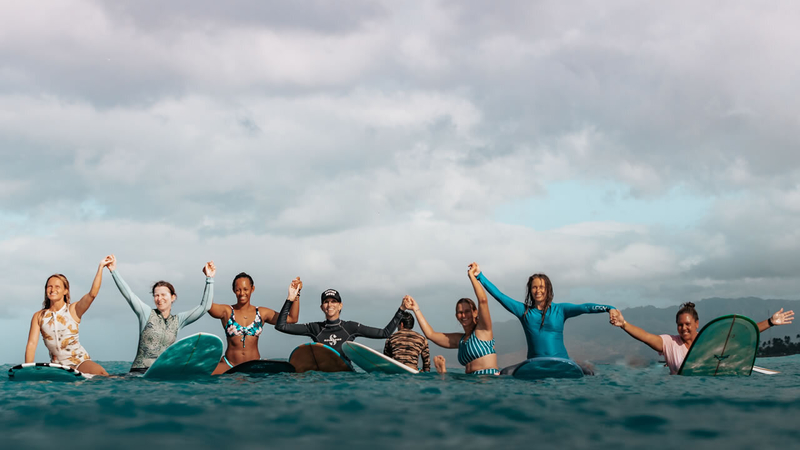 SAN FRANCISCO (KGO) -- This Mother's Day, we're bringing maternal mental health into focus. Getting involved in an activity like surfing often helps new mothers combat postpartum depression. But doing that while you have young children with you can be difficult. We take a look at a group of Bay Area moms that decided to join the "surf-swapping" wave sweeping coastal U.S. cities.

While Judy Wang's husband was putting in long hours as a frontline healthcare worker during the COVID-19 pandemic, she was pregnant and working full-time for some of the time while isolated at home with a young child.

"The pandemic was so chaotic for everyone," she said. "But our story, it was just really hard."

Wang went on to say, '"To not have my husband around and the added stress of my husband being out there every day was rough for me and it manifested a bit like postpartum rage."

She is part of a group of moms who recently came together to form the Marin County chapter of Surfing Moms, a nonprofit that started in Hawaii but is gaining momentum with mothers across California and other parts of the country.

Jenn Drummond is a Utah mother of seven on a mission to climb the 2nd highest mountain on each of the seven continents.

Elizabeth Maden, the founder and president, is a mother of three who wants to help new mothers find a path to surfing and build a community of support locally. There is a focus on maternal mental health within the group.

Maden had experienced a similar group in Australia while living Down Under and trying to find a way to surf with then with her young children.

"I had seen the sort of life changing magic for me of having a group of people to surf with but also to build an informal but very tight knit network of support for the mothers, children and the whole family, she said.

She added, "When I moved from Australia to Hawaii, I didn't really have a lot of energy honestly to do that. I was starting a new job, moving to a new country and had three small children and but I realized that it was worth it. So I just started it. I put it out there to whoever wanted to come and surf swap with me and it eventually grew. And it's kind of been growing since then."

Amanda Renschler is the Marin volunteer coordinator for the group in the North Bay. Her focus is on promoting healthy relationships with ourselves and with others through the ocean.

"We're benefiting from the therapeutic aspects of just being in the water and being together," she said.

RELATED: Supporters call for aid to mothers who left jobs amid pandemic

She is eager to grow the group, which has a few members already meeting up regularly, and loves bringing moms out as she believes it is a great way to bring play and back into their lives.

Renschler's work at her day job and her efforts to help moms find balance, support, and good mental health are all in line with the ethos of healing from the ocean.

A few years ago, Renschler, who previously worked in community mental health, quit her job to start Blue Zone Marin, a group that takes mothers and daughters out into the ocean so they learn to surf together.

"When mothers and daughters are out there bonding together, they're getting to have a real adventure. And there's something so amazing that happens after taking on this very real challenge of learning to surf, and the beauty and the all that comes with being in the ocean," Renschler said.

Alicia Davis-Gaide, a Bay Area mom with three girls, agrees. She says surfing with the group, getting to know other moms helps her not to feel alone.

Too often moms find themselves alone on their journey towards parenthood. The Nesting Place is changing this by offering a holistic approach to support services under one roof.

"When I was about five months postpartum, I was so excited that this group was starting. Because I just think that it's such a great model to do something that I love and have the kids see that to why I love the water, I love the beach," she said.

Davis-Gaide went onto say, "It seems to bring together physical, mental, emotional and spiritual. I think it's great for just relieving the stresses of the daily life of with with three kids."