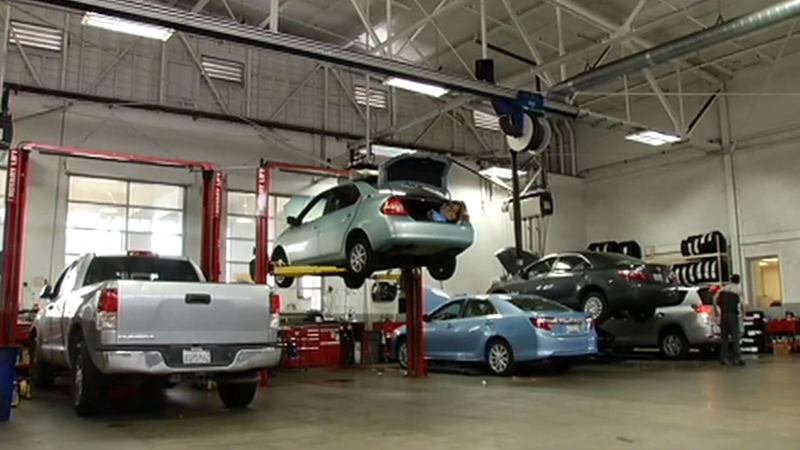 MARTINEZ, Calif. (KGO) -- The Takata recall is the largest single automotive recall in history and repair shops don't have nearly enough inventory to replace all those airbags.

A couple in Martinez is finding that out the hard way, and they turned to 7 On Your Side to find out what they could do.

"The defect in these vehicles could kill or injure you or other people in the vehicle," said a letter sent to Honda minivan owners Gina and Justin Banton.

"It's terrifying and you feel trapped," Gina said.

Their car is one of the 34 million recalled because they're equipped with Takata airbags, which could explode and spray metal pieces through the passenger cabin.

Already six motorists have been killed by the flying shrapnel and many others injured.

"You feel like you are playing Russian Roulette," Gina said.

For the Bantons, a quick repair was crucial. Eight-month-old Desmond rides every morning to daycare with his dad and the potentially dangerous airbag up front.

"It kind of felt like driving around with a bomb in the steering column the entire time. It was always in the back of my mind when he was in the car," Justin said.

Honda told the Bantons they would have to wait until October for a new airbag. They couldn't possibly drive it all that time, not with their baby in the back.

"And you just feel so stuck as a consumer. We started trying to look at other cars. Do we buy another car at this point?" Gina asked.

Gina contacted Honda, pleading for a quicker repair. "And I waited on hold for over two hours," she said.

She kept calling until, finally, Honda agreed to loan the family a car and then did one better.

"Magically, the parts had appeared and they could fix it that day," Gina said.

The dealership suddenly found them a new airbag and installed it right away.

The couple told 7 On Your Side their story and we asked federal transportation officials what others should do in this predicament.

Of course, they say, get in line for a repair.

Some dealers may lend you a car pending the fix, but nothing in the law requires them to do so.

Other dealers are disabling faulty airbags, but safety officials don't recommend that. They say never disable a driver's side airbag and fi you disable one in the passenger side, don't let anyone sit in that seat.

"We're really grateful that it came to resolution and our son is safe in it again, and that's a huge relief, but it still took so much fighting," Gina said.