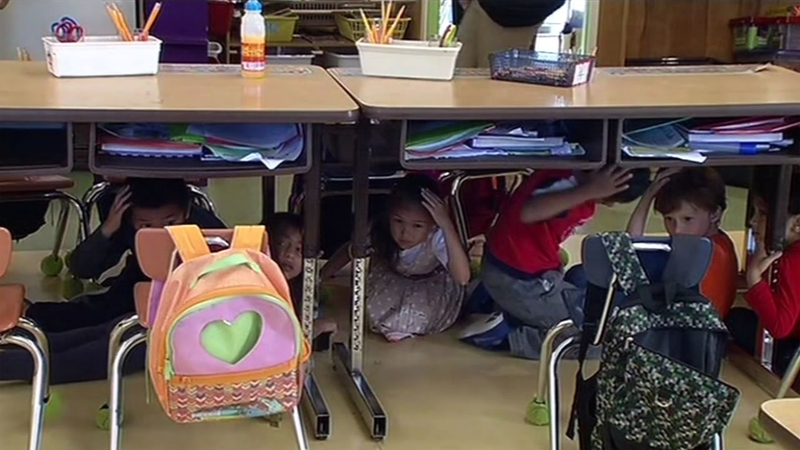 SAN FRANCISCO (KGO) -- More than 10 million Californians participated in what event organizers said was the largest earthquake drill ever on Thursday morning.

The annual Great California ShakeOut event was held at 10:15 a.m., as people throughout the state participated in simultaneous earthquake drills, practicing safety and learning ways to prepare in the event of a major earthquake.

"Instead of being scared about them, let's talk about them. And get ready for them," she said. "The earthquake is inevitable, but the disaster is not. The things we do can keep the damage from happening."

In the Bay Area, the preparedness exercise comes two days before the 26th anniversary of the 1989 6.9-magnitude Loma Prieta earthquake.

"I just really want to be prepared," said Eva Goldberg, one of the students at a San Francisco elementary school that took part in the drill at Yick Wo Elementary School.

In Oakland, city officials there hosted a free fair in front of City Hall at Frank Ogawa Plaza. The event featured a flash mob demonstration on how to reduce injury and death during an earthquake, as well as "The Big Shaker," the world's biggest earthquake simulator.

"Most earthquakes strike without warning," Gov. Jerry Brown said in a statement, citing the Loma Prieta earthquake and the 1994 6.7-magnitude Northridge earthquake in Southern California, which combined to cause more than 100 deaths, 12,000 injuries and $45 billion in property losses.

"Becoming better prepared for future earthquakes and other emergencies is something everyone can do now to protect themselves, their loved ones, neighbors and coworkers," Brown said.

Hundreds of elementary school students arrived at The Tech Museum of Innovation this morning in San Jose to learn about earthquake safety, participate in an earthquake drill and experience The Tech's earthquake simulator, museum officials said.

BART passengers also took part in the 10:15 a.m. drill, as BART engineers triggered an earthquake alarm that automatically slowed trains to 27 mph Additionally, the operations control center made public announcements to trains and stations, letting passengers know of the drill, according to BART officials.