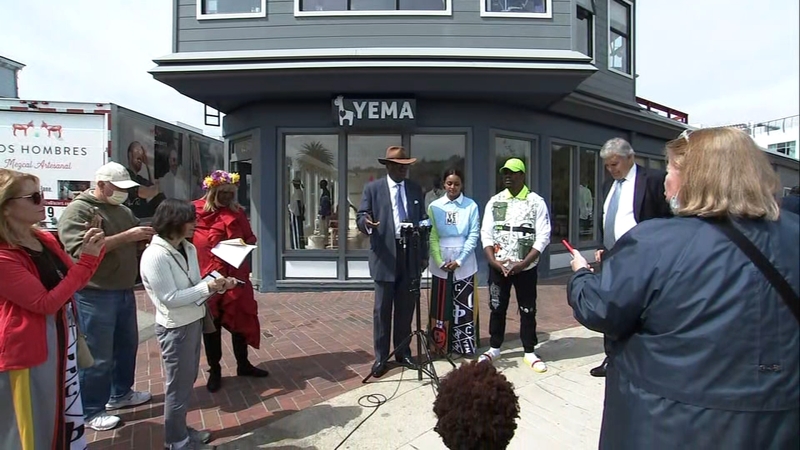 TIBURON, Calif. (KGO) -- Nearly two years after Yema Khalif and his wife Hawi Awash say they were racially profiled by police while working inside their own store in Tiburon, the couple announced they've reached a deal with the town. Tiburon has agreed to pay the couple $150,000, and make substantial changes that Khalif and Awash hope will make the upscale, Marin County community a more inclusive place for everyone.

"We are not begging, we are demanding to be treated with love, with dignity and with respect," Khalif said on Tuesday at a press conference in Tiburon.

The incident happened in late August 2020. The couple were working late at night in their clothing store, Yema, when Tiburon police approached the store and demanded the couple prove they were the owners. The situation diffused when a white neighbor yelled out to the police that it was, indeed, their store.

VIDEO: 'Show me that it's your store': Tiburon police demand Black business owner prove who he is
EMBED More News Videos

A Black business owner is speaking out after Tiburon police demanded proof he was the store's owner. There's video of the interaction and an investigation underway.

Body camera and cell phone video of the interaction went viral. It led the Tiburon police chief and one of the police officers to resign.

As part of the settlement, the town of Tiburon has agreed to create a community advisory board. Members will be able to help vet candidates for the Tiburon police department. Khalif and Awash will be part of that board.

The Tiburon Police Department has also agreed to increase the frequency of racial bias training.

Khalif and Awash were joined at their announcement by Paul Austin, the Marin City activist who alleges he and his wife were lowballed half a million dollars during their home appraisal process because they're Black. He said incidents like what happened to him and to Khalif and Awash happen more often than people realize.

"Marin County, there's so much more work we can do in order to make this place a true melting pot," Austin said.

Khalif and Awash said that since their interaction with police, they've received threatening messages. One person questioned why they use black mannequins. They recently installed security cameras outside their store.

Still, they are happy with the outcome of their settlement and hopeful it will lead to real change.

"We are doing something that is substantial that will help Tiburon and that will hopefully be an example for the rest of the U.S." Awash said.

Awash said they plan to donate a portion of their settlement money to a charity that helps educate orphans in Kenya and Ethiopia.