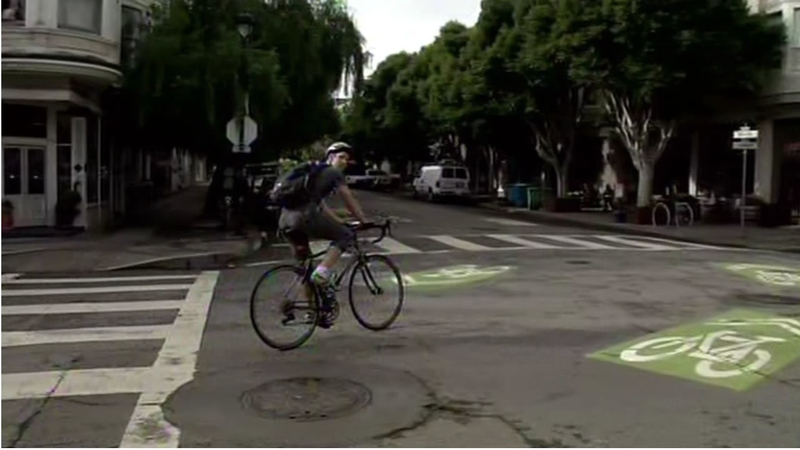 SAN FRANCISCO (KGO) -- San Francisco could become the first major city in the nation to wave bicyclists through stop signs as long as they slow down. The proposal was debated by city lawmakers Monday, but the mayor is not in favor.

Cyclists would have to stop at all red lights. San Francisco's mayor, the police chief and other critics say bicyclists should obey all the rules of the road, just like motorists.

Many San Francisco bicyclists already treat stop signs as yields, rolling through the intersection. The proposal sponsored by Supervisor John Avalos would make ticketing them the lowest police enforcement priority, as long as the cyclist is behaving safely.

"Yielding means you slow to six miles per hour, look both ways. If there's a pedestrian, come to a complete stop to let the pedestrian go by, then go on their way," Avalos said.

Back in July, protestors slowed traffic to a crawl to protest what they felt was a heavy-handed crackdown by police along a popular stretch of streets in the Lower Haight neighborhood called the Wiggle. The SaN Francisco Bicycle Coalition believes officers should follow the departments pledge to focus on the five most common causes of pedestrian injuries, including speeding and turning violations by cars, not bikes.

"It's not very smart to invest officers' resources where people aren't doing harm to each other," said Chris Cassidy of the San Francisco Bike Coalition.

The proposed ordinance would not prohibit police from going after cyclists who are clearly outrageous. The mayor says changing enforcement would create uncertainty for drivers and make streets less safe for all. Supervisor Norman Yee agrees.

"For me, I'd rather be cautious and on the safe side," Yee said.