Trade Me Project: A look at San Francisco TikToker's quest to trade up to a home 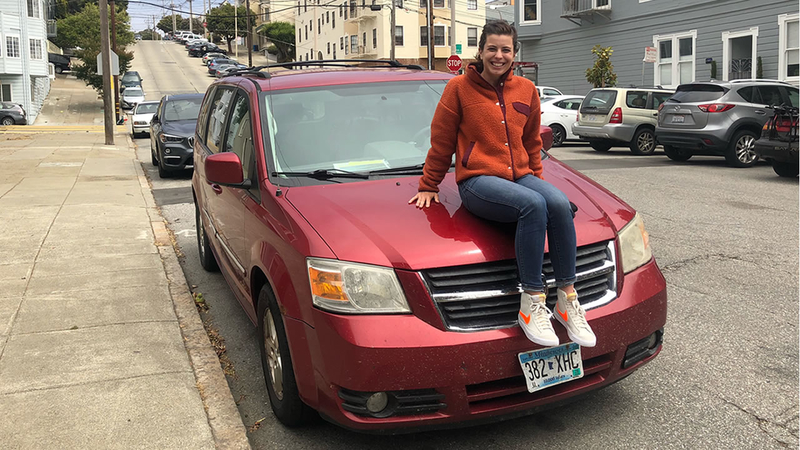 SAN FRANCISCO (KGO) -- A San Francisco woman who wanted a fun side project during the pandemic has amassed more than 3.5 million followers on TikTok from all over the world in a quest to trade up from a bobby pin to a home.

We met Demi Skipper along Noe Street in San Francisco's Noe Valley who, along with her husband was waiting with bated breath as they watched two red minivans make their way down the hill.

"I don't even know. There were just so many emotions that I can't believe it!" beamed Skipper, from behind her face mask.

In one hand Demi held a top of the line iPhone 11 Pro Max which she extended out to a woman, Norah Sabir. She and her husband Achu had driven almost non-stop all the way from Minnesota to trade one of the red minivans for the phone.

"The drive was like 31 hours," says Sabir. Who went on to explain how having a two-year-old and four-month-old on a long road trip like this posed its challenges but was well worth it.

In order to understand how we got to this moment, you need to go back two months, to when Demi watched a TED Talk and got a crazy idea. To trade a bobby pin all the way up until she got a house.

"When I set off to do this, I thought what is the smallest thing...which is a bobby pin, and what is the largest thing I can own? The answer is a house. Now that we're getting closer it's just shocking. I don't think I realized how real this was going to be until now," said Skipper whose day job is working for a restaurant reservation app and running a wedding dress rental business.

Documenting her journey on TikTok, Demi started with the lowly bobby pin, trading up for earrings, which then turned into margarita glasses and so much more. Designer sneakers, a computer, an iPhone, and now a 2008 Dodge Grand Caravan.

Her story and account called the "Trade Me Project" now has 3.5 million followers from around the globe.

"I've seen things in Germany and Singapore all over the world people have been doing all kinds of projects which is really exciting!" says Skipper, as her husband Bobby documents her interview and latest transaction with the Sabirs for their social media.

All of this brings us back to Nurah who says she is addicted to TikTok. By chance, the "Trade Me Project" popped up on her phone and with her husband on board, decided to make trading in her old college vehicle for Skipper's iPhone, part of their summer vacation.

"It was really fun!" says Achu. "We believe if you do something good, you'll get back. So this is what inspired us to do this, that motivated us to do it."

While Demi's not sure what's going to happen next, though it'll undoubtedly entail more meticulous planning and researching the thousands of offers she receives, this project is about more than a house. It's about the journey.

"Honestly these are long time friends now I think I talk to them every day this week for hours on end. I talked about their kids I know when their birthdays are I know what trips they've been on they went to Yellowstone! That also has been really special," said Demi.