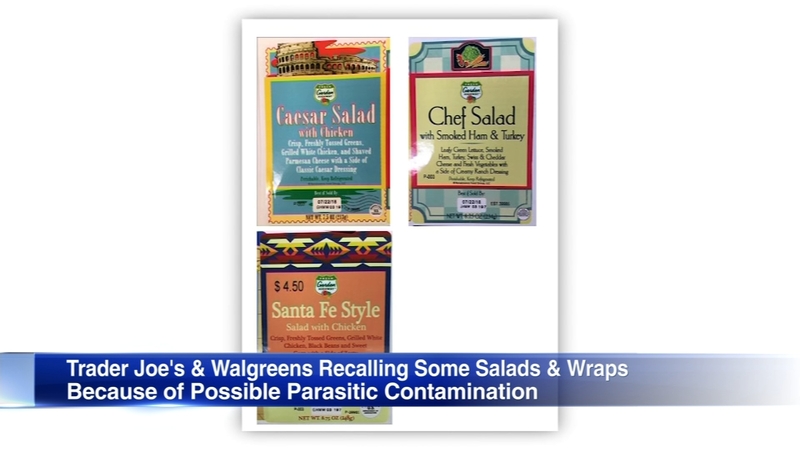 WASHINGTON -- Consumers have been warned by federal health officials not to purchase over two dozen salad and wrap products available in major grocery chains due to concerns about possible parasite contamination.

On Monday, a public health alert issued by the US Department of Agriculture's Food Safety and Inspection Service advised certain beef, pork and poultry salad and wrap products might be contaminated with cyclospora. The products were sold by grocery stores including Kroger, Trader Joe's and Walgreens.

The cyclospora parasite causes intestinal illness as a result of consuming contaminated food or water. Symptoms can begin a week or more after consuming the parasite. They can include diarrhea and frequent, sometimes explosive bowel movements, according to the Centers for Disease Control and Prevention. Those who are infected might also experience loss of appetite, weight loss, stomach cramps or pain, nausea, gas and fatigue. Vomiting, headache, fever, body aches and flu-like symptoms can also occur.

The illness can last a few days to a few months, and patients might feel better, but then get worse again. Cyclosporiasis can be treated with antibiotics.

In its alert, the USDA said the issue was discovered when Indianapolis-based food distributor Caito Foods "received notification from their lettuce supplier, Fresh Express, that the chopped romaine that is used to manufacture some of their salads and wraps was being recalled."

The list of products affected by the recall includes those produced between July 15 to 18 with either the "Best by," "Enjoy by," "Best if sold by" or "Sell by" dates ranging from July 18 through July 23.

The USDA said it was concerned that "some product may be in consumers' refrigerators and that consumers may be at risk due to the length of the cyclospora incubation period." The alert said the incubation period ranges from two to 14 days and that illnesses "might not have been reported yet due to the time it takes between when a person becomes ill and when the illness is reported."

Consumers who have purchased these products are urged not to consume them. They should be thrown away or returned to the place of purchase.

News of the recall comes after a cyclospora infection outbreak that began in May and was linked to McDonald's salads supplied by Fresh Express. The total number of laboratory-confirmed illnesses from that outbreak was at 286 as of July 26, according to the US Centers for Disease Control and Prevention. At least 11 of the sick individuals have been hospitalized.