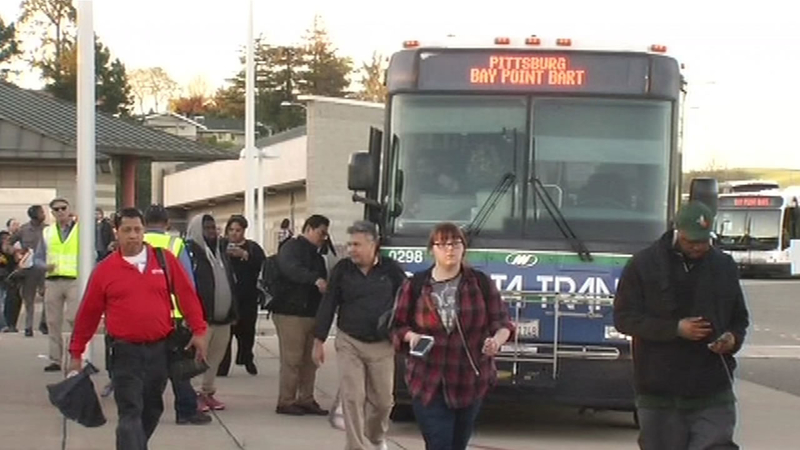 BART is running fewer trains between Concord and San Francisco and the agency is warning commuters to allow extra time Thursday morning.

At the Embarcadero station, Rachel Hallstrom was happily headed home until she heard the news. "A bus bridge? I don't even know what a bus bridge is," Hallstrom said. "So that's what I've got to do to get home tonight?"

Commuters bound for the end of the line in Bay Point learned they had to exit at North Concord. BART cobbled together a fleet of 14 buses to take them to Bay Point, but many were upset.

"It was really bad. I just want to get home," one rider said.

"Oh yeah. It's the best time of the day taking the bus at 6 o'clock. Probably 7 o'clock, oh God," one BART passenger said.

Some said they smelled something odd as they exited. "It smelled like burnt oil like a car overheating," another said.

BART tried to explain why the tracks were closed all day and all night Wednesday.

"Something is occurring that's sending a surge in voltage to only certain train cars and it's damaging a piece of the propulsion equipment," said BART spokesperson Alicia Trost. "At this point, we can't allow any more cars to be damaged. So we shut down the track to troubleshoot what's going on."

Twenty four cars were damaged. A similar mysterious electrical problem damaged 80 cars near West Oakland two weeks ago. BART is conferring with PG&E. They are running tests trains. And they tweeted an apology.

All our efforts are focused on resolving the electrical issues right now- apologies for all the trouble. We're working on it.

Waiting for the trains. It will be a long night on #BART due to power surges.
Concord>Pittsburg? Take a bus. pic.twitter.com/zbiKOJaNC7