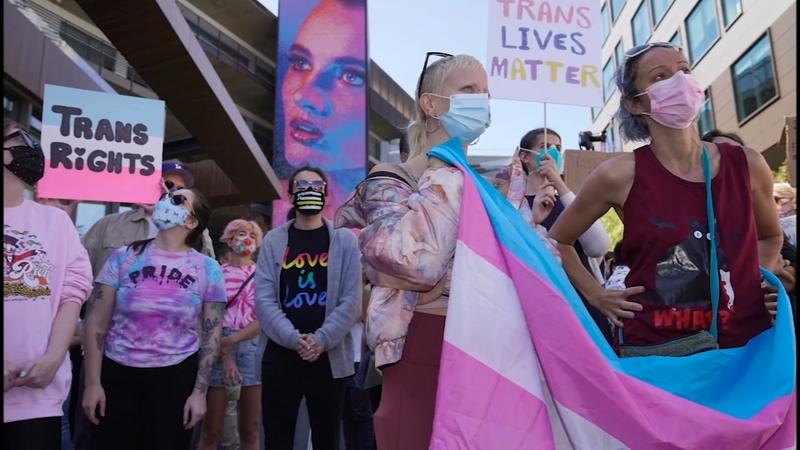 STANFORD, Calif. (KGO) -- A new paper published Wednesday supports the overwhelming body of evidence that transgender youth with access to gender-affirming hormone treatments experience better mental health outcomes than those who wait until adulthood, or those who never receive the treatment.

The paper, featuring a secondary analysis of the largest ever survey of 27,000 transgender adults in the U.S., has the potential to combat prominent arguments in anti-trans legislation bubbling up in state houses across the country in an effort to limit access to this important treatment.

The paper published in the medical journal PLOS ONE is headed by Jack Turban, M.D. who serves as the chief fellow on child adolescent psychiatry at the Stanford University School of Medicine.

"They were less likely to have thought about suicide in the past year when we asked them as adults," said Turban.

They were also less likely to struggle with alcohol abuse, use illicit drugs, or have clinically relevant mental health diagnoses-the kinds of things that would require special treatment.

Eden Torres has photographed thousands for Pride Portraits, the largest LGBTQIA visibility campaign to date. Now, she's stepping in front of the camera to share her journey to finding her true self. 🏳️‍🌈

Turban said there was an existing body of evidence pointing to the mental health benefits of accessing gender-affirming treatments for the transgender population, but this is the first study that looked into the benefits of different age groups accessing treatment.

In state houses across the country from Arkansas to Texas, a slew of bills were introduced in 2021 in an attempt to limit gender affirming treatment for youth whose gender identity does not match the body they were born into.

People are sharing their pronouns in introductions and social media profiles. Here's why.

Turban stresses it's important to note that all transgender or gender non-conforming people are not interested in hormone therapy or other gender-affirming medical treatments.

However, of the thousands of trans people who were surveyed in the 2015 report, 41% of people who wanted to access hormones were never able to access it.

Turban said, in part, there aren't enough doctors who are trained to provide medical care to trans and gender diverse people.

He hopes the findings of this new report will dispel misinformation about the effects of gender-affirming treatments that are often the focus of anti-trans policy debates.

"Some of the narratives that we are hearing today are very hostile and damaging especially toward younger transgender people," said Cecilia Chung, Transgender Law Center senior director of strategic initiatives and evaluation.

Chung, a long-time transgender activist is hopeful this research will strengthen the organization's hand in the fight to win policy battles and hearts and minds.

"Things are moving slowly, but it seems that we have more family accepting their transgender children. And it's not something that we could even imagine 40 years ago when I first transitioned," she said.

Turban echoes the sentiment that familial acceptance can go a long way.

"One of the greatest predictors of good mental health outcomes for transgender people is if their families accept them," he said. "Just having parents who say 'We love you no matter what. We accept your gender identity. We validate who you are as a person.' That does so much to make someone's mental health better."