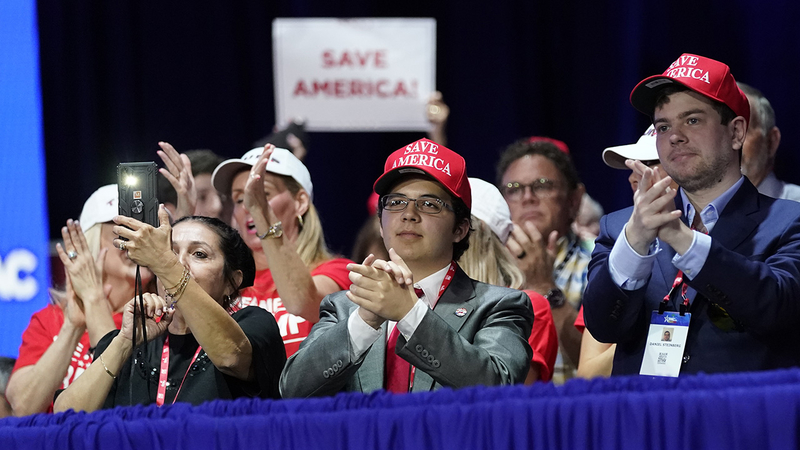 "He's a brave man, he's hanging in," Trump said of Zelensky in remarks at the annual Conservative Political Action Conference, even as he declined to back away from complimenting Putin as "smart."

"The problem is not that Putin is smart, which, of course, he's smart," Trump said. "The problem is that our leaders are dumb... and so far, allowed him to get away with this travesty and assault on humanity."

"Putin is playing [President Joe] Biden like a drum and it's not a pretty thing to watch," he continued.

What to know about Russian President Vladimir Putin after the 69-year-old leader unleashed the largest use of military force on the European continent since World War II.

The former President has repeatedly praised Putin in the days since Russian troops crossed into Ukraine and began launching rocket strikes against the country's capital of Kyiv. His comments on Zelensky come days after he lavished praise on Putin, calling the Kremlin leader "genius" and "savvy" in a radio interview. Those remarks were the latest of many instances where the 45th President has approved of, or admired, authoritarian rulers. In addition to Putin, Trump has previously made positive comments about North Korean dictator Kim Jong Un and Chinese President Xi Jinping.

But other Republicans have steered clear of admiring the Kremlin leader. In back-to-back appearances at CPAC, rumored GOP presidential hopefuls echoed Trump's criticism of the Biden administration but stopped short of complimenting Putin like the former President has.

Though Trump tempered his praise of the Kremlin leader with sharp condemnations of Putin's decision to "ruthlessly attack" Ukraine, he saved his strongest criticism for Biden and elected Democrats.

"The Russian attack on the Ukraine is appalling. It's an outrage and an atrocity that should never have been allowed to occur," Trump told the conservative gathering in Orlando. "I have no doubt that President Putin made his decision... only after watching the pathetic withdrawal from Afghanistan." Thirteen U.S. service members were killed in a bombing at the Kabul airport during the Biden administration's withdrawal this summer from Afghanistan, which has since fallen under Taliban control.

The former President, who was impeached for the first time during his presidency after using security assistance for Ukraine as bait to pressure the country's officials to investigate his political rival -- also tried to take credit for arming Ukraine in his remarks Saturday.

"I gave Ukraine the javelins that everyone is now talking about and millions of dollars of other military equipment. The Obama administration gave them blankets," Trump said.

Trump said that Russia would have never invaded Ukraine if he had been president and claimed -- falsely -- that the 2020 election had been stolen.

"Under Biden, Russia invaded Ukraine. I stand as the only President of the 21st century on whose watch Russia did not invade another country," Trump said, while describing the global perception of United States during his presidency as "powerful, cunning and smart."

"Under our administration, Russia respected America," he told the crowd.

Despite Biden routinely adopting new sanctions on Russia during his time in office, Trump claimed the Biden administration was letting Putin off "with no repercussions whatsoever" by responding to his full-scale invasion of Ukraine with export blocks and new sanctions on Russian banks and oligarchs. Biden unveiled a fresh round of sanctions on Thursday after Putin ordered Russian troops into Ukraine.

The U.S. and European nations agreed to impose the most potentially crippling financial penalties yet on Russia over its unrelenting invasion of Ukraine.

Other Republicans who took the stage at CPAC this week have also encouraged the Biden administration to take stronger actions against Putin, though they have declined to use the same positive rhetoric about Russia's leader that Trump has so often deployed.

"A strong American president would work with European partners to replace their supplies of Russian oil with American energy and they would hit Putin where it actually hurts -- on the Russian energy sector. If Joe Biden can't or won't do these things, then he should resign," South Dakota Gov. Kristi Noem declared in a speech Friday.

Trump also used his appearance on Saturday to briefly relitigate his first impeachment in 2019, which came after Trump used security assistance for Ukraine as bait to pressure the country's officials -- including Zelensky -- to investigate his political rivals.

"This was truly a scam," Trump said of the impeachment proceedings.

And he strongly hinted that he intends to run for the White House again in 2024, telling the Orlando crowd that voters will show the country that the "sleeping giant" has awoken "starting on Nov. 8 and then again even more so in November 2024.

"We did it twice and we'll do it again," Trump said.

Trump has not yet formally announced his intentions for a future presidential run, but he continues to take steps that suggest he is gearing up for a rematch with Biden. Trump made a similar comment at CPAC last year shortly after he lost to his Democratic opponent.