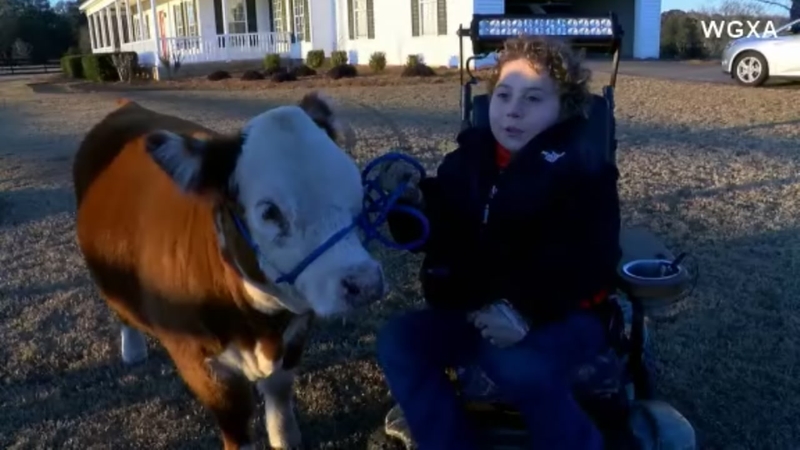 PERRY, Georgia -- It's a small friendship that means big things for one 12-year-old boy.

James McNeal was diagnosed with a rare form of dwarfism, known as Spondyloepimetaphyseal dysplasia, when he was born.

His mother, Brandi McNeal, says her son became paralyzed when he was just 2 years old and has undergone more than 30 surgeries.

When one of James' teachers suggested that he could show a mini-cow, it kicked off a passion the young boy didn't know he had.

"I guess I've always loved animals," James said. "And then one of my teachers a couple of years ago gave us an idea and said, 'You know, you can show a mini-Hereford.'"

James connected with the Director of Agriculture and Livestock at the Georgia National Fairgrounds Phil Gentry.

When Gentry saw James interacting with the cows he knew he needed to help him, he told WXGA.

A couple months later he told James he found him a mini-cow named Georgia.

It's the perfect fit because the mini-Herefood is a dwarf cow. She will always stay small enough for James to control.

His parents loved the idea but were also a little nervous that he wouldn't be able to do it. Those fears ended after the first time they saw James in the ring.

"It's really, really fun," James says. "My first show -- showmanship -- the judge said I did really, really good. And I know what I need to work on."

While James loves showing and being in the ring, he says the best part is having Georgia as a friend.

The McNeal family plans to move Georgia to their farm soon.

James has a show coming up at the end of the month and at the Georgia National Fairgrounds in February.