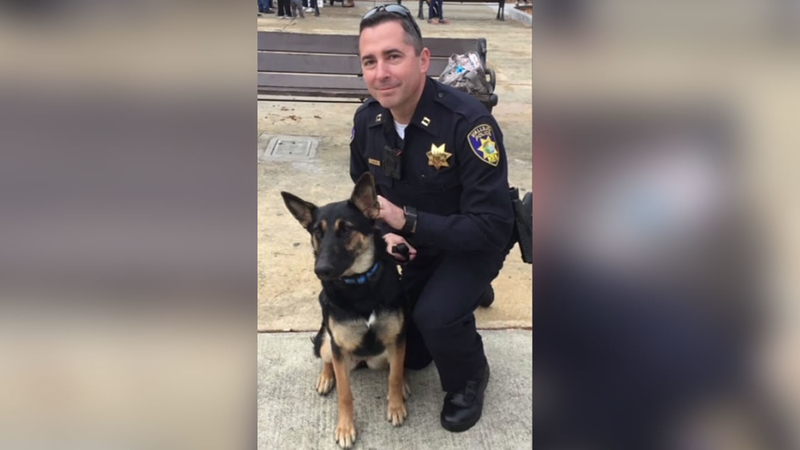 EXCLUSIVE: Ex-Vallejo PD captain says he was fired for whistleblowing

VALLEJO, Calif. (KGO) -- A former Vallejo Police Department captain is speaking out. Captain John Whitney claims in a new lawsuit he was fired for whistleblowing, including raising allegations of officers bending their badges to commemorate their involvement in an officer-involved shooting.

He spoke to ABC7 News I-Team reporter Melanie Woodrow in a story you'll see Only On 7.

The allegations are outlined in a new lawsuit Whitney is bringing against the city, police department, former chiefs Joseph Allio and Andrew Bidou, along with city manager Greg Nyhoff.

In the complaint, Whitney claims in February of 2019 two department firearms instructors alerted him that Officer Ryan McMahon had embedded the words "Veritas Aequitas" on his firearm end-plate. The Latin words mean "truth" and "justice."

"My concern is what could it mean to him? Does he believe he's invoking justice upon the community? And that's certainly a concern," said Whitney.

In an emailed statement, McMahon's attorney tells the I-Team in part, "The inscription is directly related to Officer McMahon's Roman Catholic faith."

Also, "The matter was investigated by the Vallejo Police Department and Interim-Chief Allio determined that Officer McMahon had not violated department policy."

According to his lawsuit, Whitney reported it up the chain of command and advocated an internal investigation be conducted.

McMahon was placed on administrative leave and required to surrender his badge.

"The internal affairs sergeant had discovered that his badge was not sitting flush on the table and brought it to my attention and Chief Bidou's attention and what we discovered was the two points on the badge had been bent and the sergeant went back and talked to officer McMahon and was told that the bends were as a result of another officer bending them and it was done because he had been in two officer-involved shootings," said Whitney.

"Officers were bending their badges to commemorate when they were in an officer-involved shooting and each bend signified a shooting that they had been in," Whitney continued.

Instead Whitney says Chief Bidou had him instruct sergeants, lieutenants and captains to collect and turn in all bent badges. He says approximately 10 were collected.

"Chief Andrew Bidou told me to get those badges back to the officers and have them all repair them themselves and pay for the repairs themselves. He was afraid that if the badges had been returned to the badge repair company or the badge making company that it would generate a bill that finance would see and there'd be questions about why so many badges had to be repaired," said Whitney.

McMahon's attorney would not address allegations of badge bending.

Whitney also alleges, while serving as acting police chief when Chief Bidou was on vacation, he told city manager Greg Nyhoff what he heard supervisors were doing the night officers shot and killed Willie McCoy at a Taco Bell drive-thru.

"The supervisors were apparently in the police department watching Netflix, both supervisors," said Whitney.

Whitney says he sent the information to Chief Bidou.

"He did not want an investigation conducted because it would add further liability to the department for the failure to supervise," said Whitney.

Officer Ryan McMahon was one of the officers who fired his gun that night. On Sept. 30 of this year, current VPD Chief Shawny Williams fired McMahon for violating department policies by engaging in "unsafe conduct and neglect for basic firearm safety."

While VPD would not provide more detail, a civil rights attorney for McCoy's family has said McMahon was let go because there was another officer in his line of fire during the McCoy shooting.

"Had the original weights stayed, I don't believe he would have promoted at that time," said Whitney.

Whitney says he was in the room when Chief Bidou allegedly instructed Lt. Kenny Park before a now infamous press conference.

"The fact that we've essentially wasted all of these resources for really nothing is upsetting," said Lt. Park during the 2015 presser.

According to Whitney's lawsuit, within weeks of reporting mismanagement of the department to the city manager and mayor, Chief Bidou ordered an investigation into Captain Whitney.

His attorney Alison Berry Wilkinson says Whitney was fired in August of 2019 for factory resetting his department-owned cellphone before turning it in for inspection.

"We have the evidence that his phone was used to access several of Whitney's personal accounts after it had been surrendered to the police department. If the data on his phone had been deleted as they allege, that would have been impossible," said Wilkinson.

Whitney believes the department terminated him because he was a whistleblower.

"I was doing everything I could to make the Vallejo Police Department a better place," said Whitney.

A city spokesperson says Whitney and his attorney have not served the city with the civil lawsuit yet.

In an emailed statement, the spokesperson tells the I-Team in part, "Mr. Whitney did not raise badge bending claims or allegations relating to PD staff watching Netflix on duty in either his tort claim or in the administrative hearing provided to him. In addition, Mr. Whitney never filed any whistleblowing complaints with the City during his employment."

On July 31 of this year, Chief Williams launched an independent, third-party investigation into allegations of badge bending by Vallejo Police Officers after saying the city received statements from two different sources within the Vallejo Police Department that badge bending occurred.

The department did not respond to the I-Team's requests for comment on the status of the investigation or Whitney's allegations. The I-Team attempted to reach former chief Bidou for comment but did not hear back from him.