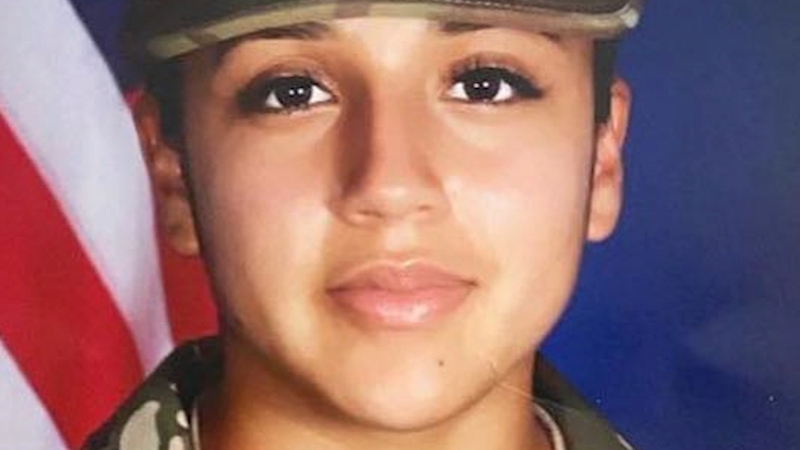 Guillen's suspected killer was placed under the watch of an unarmed escort. -- Ryan McCarthy, secretary of the U.S. Army, doesn't know if there will ever be justice for Army Spc. Vanessa Guillen, but he says "it's clear" that the Army let her family down.

"We have to find answers and we will hold people accountable," McCarthy told "20/20."

The uninterrupted episode features previously unreported information on the investigation and how Vanessa's killer left Fort Hood the day he died by suicide.

Guillen was a 20-year-old Houston native who loved to run. She was a small arms repair soldier at Fort Hood, one of the largest military installations in the country, in Killeen, Texas. Her job was to ensure weapons were maintained, and she helped with inventory in the arms room.

On April 22, she was allegedly killed in one such room by another soldier, Spc. Aaron Robinson, who was ranked above her at the time. That night, Robinson picked up his girlfriend, Cecily Aguilar, and together, they allegedly dismembered and buried Guillen's remains near the Leon River in Belton, Texas.

Watch more reports about Vanessa Guillen's murder and her family's push for justice on ABC13 apps on your Roku, Fire TV or other smart TV devices.

Army investigators first linked Guillen to Robinson because he was the last person known to have seen her alive. They spoke with Robinson multiple times about Guillen's disappearance.

On the night she vanished, three soldiers saw Guillen while they stood by a tree, smoking outside the arms room, Maj. Gen. Donna Martin, the Army's provost marshal, who heads the Army's Criminal Investigation Command, told "20/20."

She said the soldiers told investigators that they saw Guillen at "a time that would've indicated she had left Spc. Robinson's arms room."

"That led us to the parking lot, where they said they saw her walk," she said. "We did a lot of investigation out into the parking lot to see, maybe, if she had been abducted [there]. We brought in search dogs to see if they could catch a scent... But we didn't find anything."

Additionally, there were no cameras near the parking lot or near the arms room to capture Guillen's movements, Martin said.

McCarthy says testimony from those three soldiers threw off the investigation for an entire month.

"They filled out affidavits that said they had seen Vanessa at a different time from when she had actually departed the other arms room. So that gave ... essentially an instant alibi for Spc. Robinson, even though they had not really known the correct time of when she had actually departed and headed to the parking lot," he explained. "The trail went cold for about a month."

While searching Robinson's phone records, investigators found that Robinson had called Aguilar multiple times on the night Guillen vanished. The calls raised suspicion as Robinson initially told investigators he had been with Aguilar all night. Aguilar later changed her story, according to court documents, claiming that she and Robinson went on a drive to look at the stars that night.

On June 30, when investigators found remains near the Leon River, they confronted Aguilar, after which they say she confessed.

According to the criminal complaint against Aguilar, Robinson told her he had bludgeoned Guillen to death with a hammer in the arms room. The complaint details her alleged statements to law enforcement about how she helped him get rid of the body.

Investigators say she told them that she and Robinson used what has been described as a hatchet or an ax to dismember the body and that they then tried to burn the body, but it didn't work. They allegedly buried the remains and returned days later to bury the remains in concrete.

Congress is stepping in and investigating the disappearances and deaths of soldiers at Fort Hood. Watch the video above for more details on the cases involved.

On the same day that Guillen's remains were found, Robinson was placed in a room under the watch of an unarmed escort.

Robinson "was not detained," Martin explained. "He was not in police custody because of [how] the legal process works." Nevertheless, investigators were suspicious he was involved in Guillen's disappearance.

Investigators at the time already knew that Robinson's phone had pinged late at night in that same area where Guillen's remains were found. His alibi no longer checked out.

Robinson fled from the base the same day Guillen's remains were found. His escort gave chase.

"He gets in a vehicle and he flees and he leaves Fort Hood," Martin said. Army officials are not revealing at this point how Robinson was able to access a car.

Because the investigation is still ongoing, Army officials are not disclosing where or how he got the gun, but Martin said that the "firearm, I can tell you, was not a government weapon. So he did not get it from his arms room."

"All of this is unfolding at the same exact time... What we didn't maybe expect was the media broadcast," she said. "The media broadcast was really kind of what we believe to be the tipping point for Spc. Robinson to flee."

The public doesn't know much about Aaron Robinson. He was a 20-year-old enlisted soldier from Calumet City, Illinois. Prior to joining the Army, he played football at Thornton Fractional North High School. In 2018, he was deployed to Iraq for about seven months.

At the time of Guillen's death, he was a specialist and Guillen was a private first class. She ranked one level below him but she was also about to become a specialist.

In early June, Guillen's mother, Gloria Guillen, revealed to the world that Guillen said she was being sexually harassed at the Army base.

"I was told that he followed her into a shower," Natalie Khawam, the Guillens' family attorney, told "20/20." "And there was another person that also harassed her, used vulgar words."

Martin said that she believes the allegation pertaining to the shower incident may have been a misunderstanding with a completely separate soldier rather than Robinson. Martin explained that during field exercises, soldiers would use baby wipes to clean themselves and referred to it as a "hygiene shower."

"She was actually behind a bush and she was conducting field sanitation," Martin said. "Her platoon sergeant may have walked by and heard some noise... He called out and said, 'Is there someone there?' She identified herself. And he said, 'What are you doing?' And she says, 'I'm conducting personal hygiene.' And that was the encounter."

"In our criminal investigation, we found no evidence of sexual harassment between Vanessa and Spc. Robinson... That was ruled out very early," Martin said.

In an emotional sit-down interview, Vanessa Guillen's mom, Gloria, had a strong message for the Army.

Who is Cecily Aguilar?

On July 14, a federal judge in Texas denied bond for Aguilar, who had been charged with conspiracy to hide and destroy evidence for her role in allegedly helping to dispose of the body of soldier Vanessa Guillen. Aguilar pleaded not guilty and is scheduled to begin her trial Sept. 28.

"I said, 'There's no way,'" Clough told "20/20." "I just can't see my best friend doing that to another human. You know, she has a heart. She's kind to people. And she has a very weak stomach, especially. And for them to say what she was doing and had done, I just couldn't believe it. "

Aguilar had been living with Aaron Robinson, Guillen's suspected killer, for a short time, when Guillen died in April, Clough said.

"And then a month later, my best friend is in prison," said Clough.

Aguilar, a civilian, is the estranged wife of another former Fort Hood soldier, Keon Aguilar. Robinson moved in with them in December 2019, according to Clough.

"[It] was the first time I had heard [of] Aaron moving in with her and Keon," Clough said. "[Cecily] was just, like, 'This is Keon's friend. They're in the Army together.'"

Aguilar was having a rough time in her marriage, according to Clough, who suggested that may have contributed to her decision to begin a relationship with Robinson.

"She had told me that when she moved out of Keon's house that Aaron had came with her...and they were dating," Clough said.

"I think what happened was that [Robinson] was [a] friend for Cecily," she added. "He was someone she could lean on."

When asked why Aguilar might have helped Robinson dispose of Guillen's body as alleged by authorities, Clough said, "I think she was scared. The only way I can see her doing something like this is for the fear of her life."

Clough said that when Aguilar was 12 years old, she entered the foster care system. Four years later, she was living on her own in a park in Jackson, Michigan.

"Foster care for Cecily was rough. She hated it," Clough said. "She just wanted to run away. She said that she always stuck to herself. She was quiet."

Nine days after Aguilar and Robinson allegedly disposed of Guillen's body, Aguilar posted a photo on Instagram with the caption: "I will not have you without the darkness that hides within you. ... I will not let you have me without the madness that makes me. If our demons cannot dance neither can we."

On June 26, four days before her arrest, Clough said Aguilar tried calling her."She tried phone calling me. I missed it, and I told her I couldn't talk to her right now," Clough said.

"I never ended up calling her. I don't know what that phone call could've been, but I really wish I wouldn't have missed it," Clough said. "I wish I could just talk to her one-on-one with nobody else and ask her, 'Cecily, what happened?'"

Steve describes some of the most emotional moments and the turning point in the case.