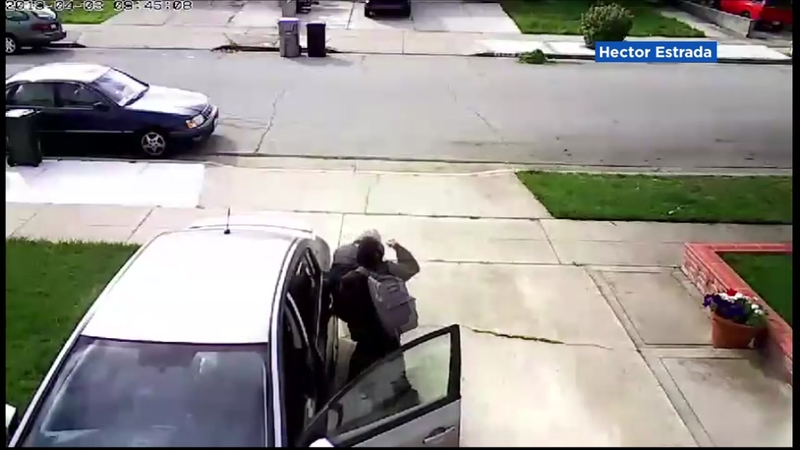 VIDEO: SJ man carjacked in his own driveway

SAN JOSE, Calif. (KGO) -- A 14-year-old boy was arrested for allegedly carjacking and violently assaulting a San Jose Man in his own driveway.

The whole violent attack on Coldwater Drive was captured on the victim's surveillance camera.

72-year-old retired plumber Hector Estrada says the confrontation began Wednesday morning when the suspect approached him while he was unloading groceries in his own driveway.

Estrada says the suspect pulled a gun and demanded his keys.

The carjacker then hopped into the car and tried to take off, but Estrada wasn't about to give up without a fight.

That's where the surveillance video he shared with ABC7 News begins.

"I reached in and grabbed it and tried to pull him back. He punched me and broke my glasses," Estrada explained.

72 year old Hector Estrada tells ⁦@abc7newsbayarea⁩ why he tried to pull a 14 year old out of his car after the juvenile brandished a gun during a carjacking. Cuts on nose from scuffle. At 4 & 6pm #abc7now pic.twitter.com/CWfmHBGMD8

In the video, the attacker can then be seen exiting the vehicle and punching Estrada several times in the head.

"I started bleeding and then I couldn't see anymore so I just went around the car."

At this point the attacker heads back into the car and takes off.

San Jose Police say that 10 minutes after Estrada was carjacked they got another report of a hit and run crash involving Estrada's car.

The suspect reportedly ran a red light at Story Rd and McGuinness Drive and hit another car.

The suspect then fled the scene, leaving Estrada's car behind.

Detectives were able to track down the 14-year-old suspect later that evening and booked him into Santa Clara County Juvenile Hall on charges of carjacking, robbery, assault with a deadly weapon, and elder abuse.