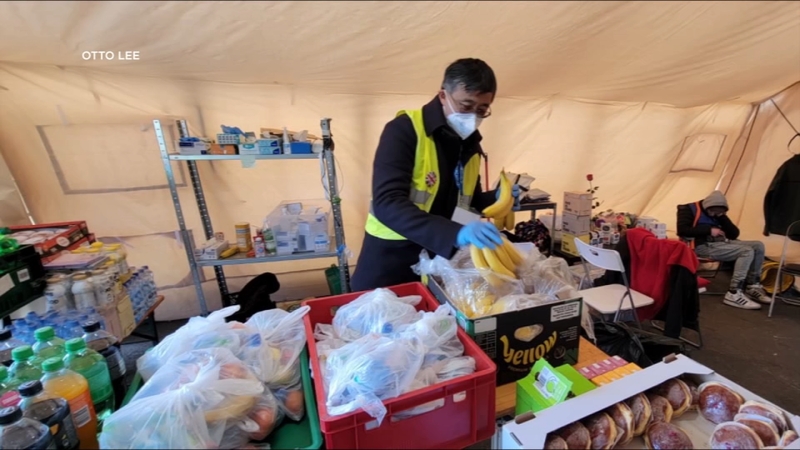 SAN JOSE, Calif. (KGO) -- While some of us have been taking spring break vacations, the war in Ukraine continues to cause human suffering among those who became refugees and others who stayed behind. That prompted a Bay Area supervisor to end a European vacation early and tend to the needs of Ukrainians who escaped to Poland.

With the number approaching five million, the exodus of Ukrainians escaping to Poland and other European countries was weighing on the mind of Santa Clara County Supervisor Otto Lee as he vacationed in Spain. A Navy veteran with nearly three decades of service, he decided to forego vacation and undertake a humanitarian mission. He flew to Warsaw.

A group of veterans are on a medical mission to Ukraine, including a Bay Area man who is a newly-retired member of the elite US Army Special Forces.

"I was able to volunteer some of my time," Lee said. "One of the days, I was out there for about seven hours to give out bananas, apples, water and those types of items to those who are transiting."

For four days and three nights, Lee took in the magnitude of the refugees' plight. They were overcome by the war. They were exhausted. They were hungry.

"I remember giving a banana and a couple of apples and water to this old lady, and she was tearing up," Lee said. "It's just these are the things that you see. The human toll has taken place, very real in front of your eyes."

He met another woman carrying a puppy who had left the southern port city of Mariupol, which has been a major target of Russian bombings. While many refugees expressed hope they will return to their homeland when the war ends, Lee expressed sadness that destruction has been so extensive in Mariupol that there may not be anything standing if she returns.

Even as the World Central Kitchen volunteers provided meals, Lee saw additional needs. He went to a local market to buy and then donate bread and canned ham.

A Russian San Francisco couple helped raise $200,000 for Ukrainian refugees. The husband is now flying overseas to give them the money in person.

At first, he was reluctant to share with ABC7 News his mission of service. He's not one to brag or seek attention. However, he says the exposure to the refugee situation provided insight into the needs of those who may eventually resettle in the Bay Area. He is especially concerned about the psychological trauma of war, known as PTSD or post-traumatic stress syndrome.

"Especially for the children," said Lee. "They didn't really understand a lot of what's going on other than the fact that Dad has to stay behind, and they have to suffer these loud bangs and bombs. So it's going to take many, many years for them to recover."

Lee hopes continued diplomatic efforts will have an effect on the Russian president, Vladimir Putin.

As more than 1-million flee, thousands of Bay Area Ukrainians are looking to head the opposite direction - to go home and fight against Russia.