KGO
Daredevil Nik Wallenda has his sights set on a new daring highwire stunt, this time across an active volcano. Here's a look at everything to know about "Volcano Live! with Nik Wallenda" on ABC:

How, when to watch 'Volcano Live! with Nik Wallenda'

What to know about Nik Wallenda's volcano stunt

Wallenda will attempt a 1,800-foot walk over the Masaya Volcano in Masaya, Nicaragua. According to the network, the stunt will mark Wallenda's "longest and highest highwire walk ever attempted."

The network added: "Part of the famed Pacific Ring of Fire, Masaya encompasses multiple craters and is one of very few volcanoes to possess a lava lake. The extreme environment at Masaya will add an extra set of risks to Nik's already daring walk. Throughout the televised event, Nik and his family will be featured in interviews about the rigging, planning and execution of the walk. Volcanologists and various professionals will also be on-site to lend their expertise."

Nik Wallenda will attempt a 1,800-foot walk over the Masaya Volcano in Nicaragua, his longest and highest highwire walk ever attempted.

"After spending years scouting and researching volcanoes, I fully realize why no one has ever attempted this feat: Mother Nature is extremely unpredictable. It is by far the most dangerous walk I have EVER attempted, and that alone makes it very intimidating," Wallenda said in a statement. "I am pushing myself beyond my comfort zone by the feat itself, but I know that I am up to the challenge. I must admit, it is scary."

In a statement, a representative said the government of Nicaragua was "thrilled to be able to showcase Nicaragua through an ambitious walk by Nik Wallenda."

"The Bachelor" host Chris Harrison has signed on as the official emcee of the special, and ESPN anchor Sage Steele will co-host.

What to know about Nik Wallenda's Times Square highwire walk, other specials

Wallenda's volcano walk is the latest in a string of daring highwire walks. He and his sister Lijana walked 25 stories above Times Square last year.

Nik Wallenda is a seventh-generation acrobat but said he was nervous during that walk. His sister, Lijana Wallenda, joined him for the first time since her near-fatal accident in 2017, when she broke nearly every bone in her face. The two were wearing tethered safety harnesses required by the city in case they fell.

The siblings walked from opposite ends of the 1,300-foot wire suspended between the towers, crossing each other in the middle, where Lijana Wallenda sat on the wire and let her brother step over her. Both then continued to the opposite side.

Previous televised specials have chronicled Wallenda's walks across a Grand Canyon gorge, across Niagara Falls and between skyscrapers in Chicago.

The Wallenda family has been a star tightrope-walking troupe for generations, tracing their roots to 1780 in Austria-Hungary, when their ancestors traveled as a band of acrobats, aerialists, jugglers, animal trainers, and trapeze artists. They never use nets in live shows or in rehearsals.

In 1978, 73-year-old Karl Wallenda fell to his death from a high wire strung between two buildings in Puerto Rico. In 1962, Karl Wallenda's nephew and son-in-law died, and his son was paralyzed, after a seven-person pyramid collapsed during a performance. Lijana Wallenda's fall happened during an attempt to break a Guinness world record with an eight-person pyramid.

The accident in Sarasota, Fla., involved famous daredevil Nik Wallenda and his family, the Flying Wallendas, who are known for performing high-wire acts without safety nets.

Lijana Wallenda said after her Times Square walk that she could have quit wire walking after her traumatic fall but "I wouldn't let that fear consume me."

She is "living proof" that anybody can step out of their comfort zone and overcome their own fears, her brother added. 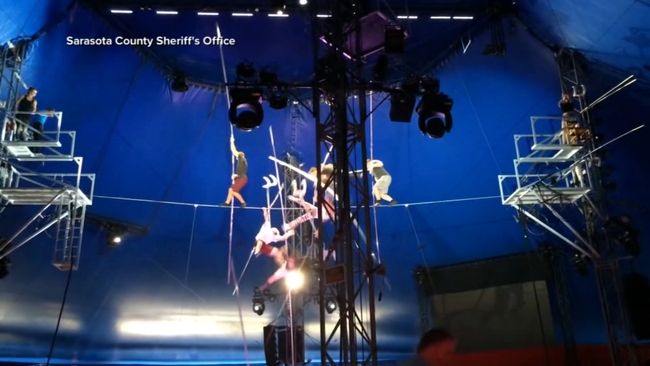 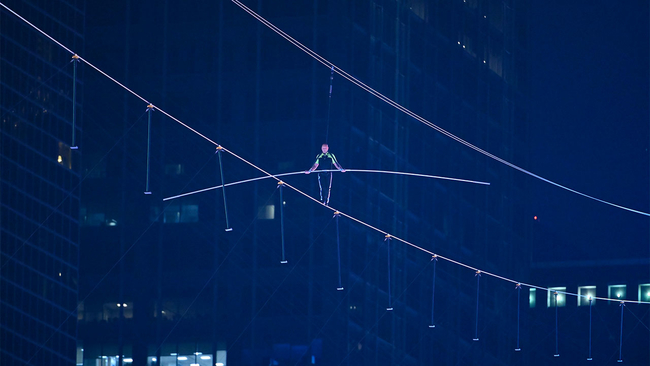