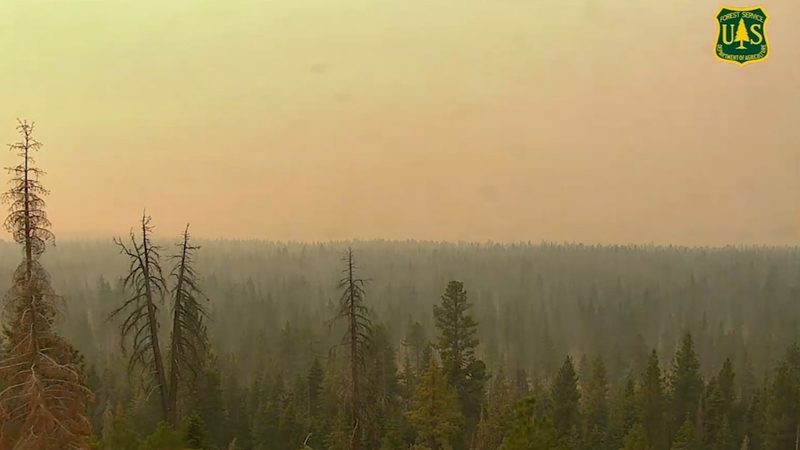 Expert says get used to bad air quality in CA

SAN JOSE, Calif. (KGO) -- Fire science experts say Bay Area residents may soon have to get used to the fact that smoky skies and bad air quality is just part of the California lifestyle.

Lake Tahoe is normally one of the most picturesque places in California.

But as the Dixie and River wildfires continue to burn, you could hardly see the beautiful Tahoe blue lake on Friday.

The Dixie Fire burning in Plumas County of the Northern Sierra has burned the town of Greenville, challenging nearly 5,000 firefighters.

South Lake Tahoe Resident Connor Rounds has to wear a mask just to go outside, he says it doesn't even look like home anymore.

"Yesterday, I mean, it was clear skies all day and then today especially it is a lot darker than it normally would be," Rounds said. "Normally you would be able to see the whole mountain, the forest, the hills, the ski run, you can't see any of that right now."

Parts of California saw some of the worst air quality in the world on Friday.

Just south of the Dixie Fire in Plumas County, there was an AQI of 834, hazardous is considered 300.

"Our weather pattern has been winds from the Southwest so it's pushing those fires into the forest, it's causing alignment in the deep canyons of the Sierra Nevada and so we're getting extreme fire behavior," Clements said. "That smoke is actually going out of state, but when the winds shift and that turns around, it's going to inundate the Bay Area and other parts of the state."

But a wind shift has now caused smoke to travel hundreds of miles south and Dr. Clements says it's just the start.

"I think we've been kind of lucky this year so far," Dr. Clements said. "We just haven't had a lot of big fires until now. But now we're getting into August and the fuels are even more critical. We're getting into even more critical fire weather patterns. So, the next couple months could be pretty challenging for not only for our communities, but for our firefighters."

Dr. Clements has looked at their fire models and says climate change and drought are contributing factors in a troubling prediction that he has for Californians going forward.

"I think residents of the Western US are just going to have to get used to smoky skies and bad air quality as we go through the next few decades," Clements said. "These fires are burning hotter, they're burning more intensely and so, they are creating a lot of smoke and it could really impact communities. So, we have to get used to that unfortunately."

Dr. Clements suggests that residents do their part to prepare for fires with fire kits, home care and proper masks.