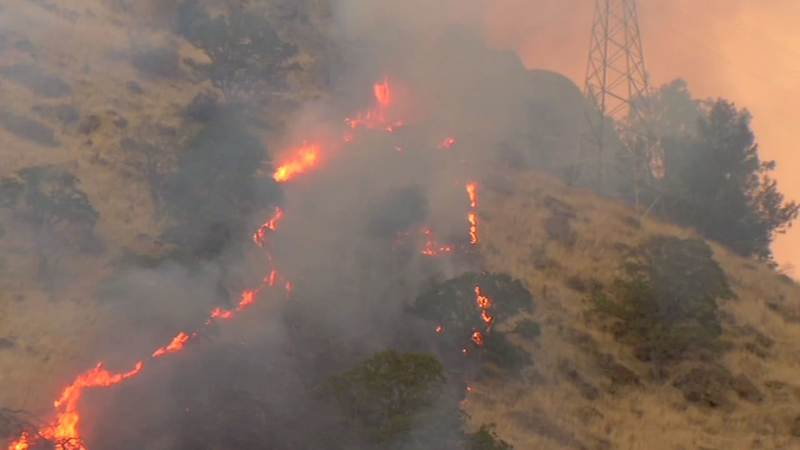 WINTERS, Calif. (KGO) -- Fire crews are racing to get control of a raging wildfire in Napa and Yolo counties. More than 1,700 acres are burning, evacuations are in place and there is zero containment.

The fire started at around 4:30 p.m. and it's burning near the Napa and Yolo County line to the east of Lake Berryessa and near the Monticello Dam.

The fire exploded in size in just a matter of hours. Cal Fire is attacking the blaze from all sides with water drops. Flames jumped a ridge, moving toward the Canyon Creek Camp Resort in Winters.

"It's very close and it makes me very nervous," said camper Nancy Peters.

Campers were told to evacuate, but some defied the order, choosing to stay.

The Sweeney family is on the move, and cut their summer vacation short by a week.

"I'd rather go now than wait until it's a madhouse," Pat Sweeney said.

The fire ravaged hills alongside Highway 128, burning everything in its path. Sky7 HD captured the scope and size of the fire. Modified DC10s dropped flame retardant from above. More help is needed.

"We're trying to get resources fast as we they can to get here. The drought's not helping, and everything is tinder dry out here, so it's not helping with the fire spread," said Russell West of Cal Fire.

Fires have raged through the area before. The Monticello Fire which scorched 6,500 acres in 2014. Fireworks were blamed for the cause. The 2015 Wragg Fire burned more than 8,000 acres.

"We've been here before. We were evacuated a year ago this same time," Peters said.

Campers and locals know the drill, be ready to leave when the fire gets close.

Cal Fire has opened up an evacuation center in Winters at the Public Safety Center. Firefighters are also putting out a call for more firefighters.