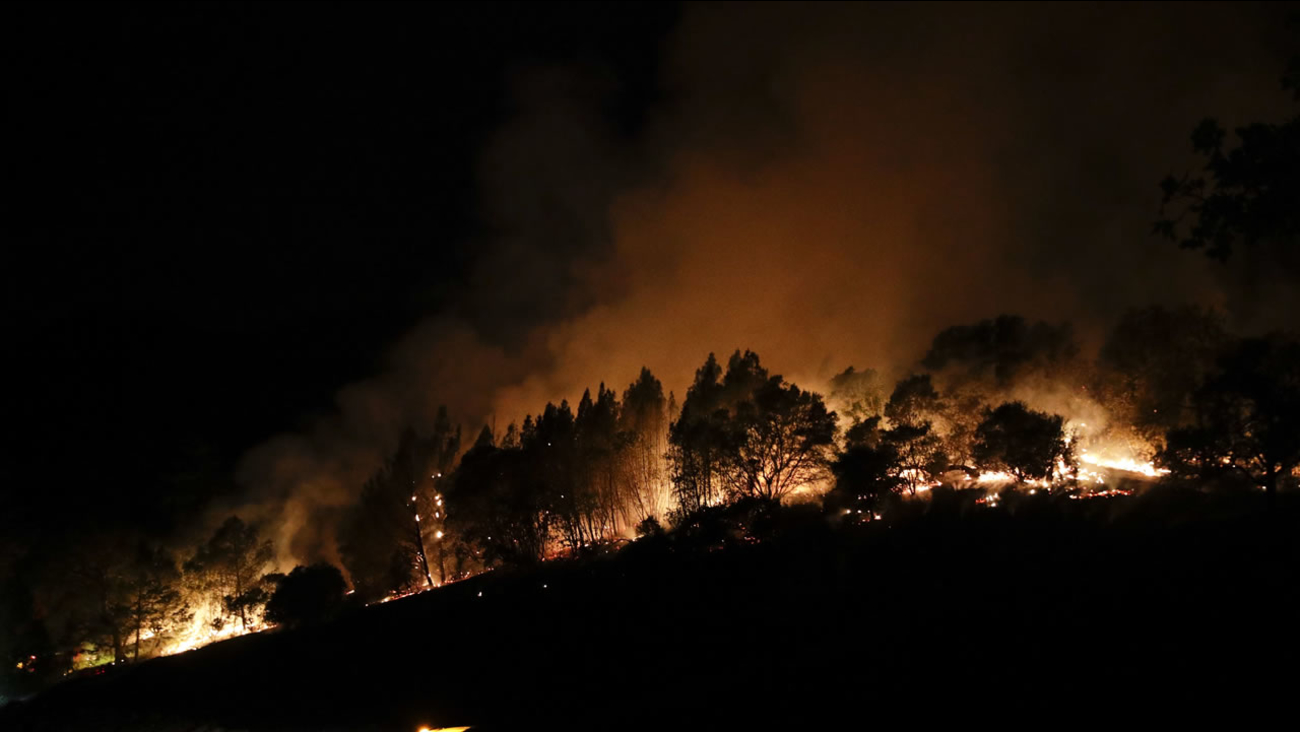 AP
SONOMA, Calif. -- The California wildfires raced toward wineries and the historic town of Sonoma on Saturday, chasing hundreds more people from their homes and threatening to roll back firefighters' modest gains against fires that stretched across a 100-mile swath of Northern California.

Propelled by stiff winds, the fires damaged or destroyed several buildings in the middle of the night before crews halted their advance at the edge of Sonoma, where firefighters spent days digging firebreaks to keep flames from reaching the city's historic central plaza built centuries ago when the area was under Spanish rule.

For those living in the huge fire zone, it was another night spent watching, waiting and fearing the worst.

John Saguto said he awoke several hours before dawn at his home east Sonoma to see flames "lapping up" 300 to 500 yards away. He and his neighbors evacuated as firetrucks raced up and down the streets and hot embers flew over their heads.

The fire made "a strong run" into Sonoma and damaged or destroyed additional buildings before firefighters stopped it, said Dave Teter, deputy director of the California Department of Forestry and Fire Protection.

Several homes and other structures near a vineyard east of downtown were in smoldering ruins. Firefighters hosed down embers and knocked down walls that could topple over.

As of Saturday afternoon, Teter said crews did not expect any more losses in that area. But gusts up to 25 mph were forecast for the rest of the day.

Nearly a week after the blazes began, the fires have left 40 people dead and destroyed at least 5,700 homes and businesses, making them the deadliest and most destructive group of wildfires in California history. Some 300 people remain unaccounted for, though officials think they'll locate most of those people alive.

Most of the deceased are believed to have died late on Oct. 8 or early Oct. 9, when the fires exploded and took people by surprise in the dead of night. Most of the victims were elderly, though they ranged in age from 14 to 100.

"It's a horror that no one could have imagined," Gov. Jerry Brown said, after driving past hundreds of "totally destroyed" homes with Sens. Dianne Feinstein and Kamala Harris.

From the sky, large subdivisions that burned to the ground looked like black and white photos. Each neatly outlined lot is full of ashen rubble. Cars are burned a darker gray. Trees still standing are charred black. Only streets look unscathed.

Brown, 79, and Feinstein, 84, said the fires were the worst of their lifetimes. The two veteran politicians reminded people that the blazes remain a threat and that people need to leave their homes when told to go.

No causes have been determined for the fires, though power lines downed by winds are seen as a possibility.

Although some evacuees were returning home in Mendocino County, the latest estimates were that about 100,000 people were under evacuation orders as the fires burned for a sixth day.

Some evacuees weary from nearly a week on the run demanded to return home or to see if they still have homes. Plans were in the works to reopen communities, but they were not ready to be put into effect, Teter said.

Douglas and Marian Taylor stood outside their apartment complex Saturday in Santa Rosa with their two dogs and a sign that said "End evacuation now."

Their building was unharmed at the edge of the evacuation zone with a police barricade set up across the street. The couple said they are spending about $300 per day to rent a motel and eat out, and they want to return home because the fire does not appear to threaten their home.

At an evacuation center at the fairgrounds in the Sonoma County city of Petaluma, volunteers sorted through mounds of donated baby wipes, diapers, pillows, shoes and clothing.

Randy Chiado and his wife, Barbara, evacuated Monday from the Oakmont section of Santa Rosa. They stayed for several days with a friend in Santa Rosa but left Saturday when flames approached again and sought refuge at the fairgrounds.

Life away from home has been difficult and dangerous. Randy Chiado said a man who may have suspected he was a looter tried to punch him through his car window and yelled for a friend to get a gun when the Chiados turned onto a residential street. He said he was able to push the man off and drive away.

The couple planned to spend the night with other evacuees in a room set up with cots. "It's like jail," he said.

In all, 17 large fires still burned across the northern part of the state, with more than 10,000 firefighters attacking the flames using air tankers, helicopters and more than 1,000 fire engines.

Signs posted in Sonoma thanked the firefighters. One declared them "heroes among us."

Throughout the day, fires continued to flare and burn through forested areas, engulfing extremely dry vegetation. Air tankers streamed red retardant to halt the spread of flames while other planes and helicopters made targeted water drops.

In a rural section of Santa Rosa, a low-flying helicopter dumping load after load of water on homes and mansions sent startled cattle stampeding.