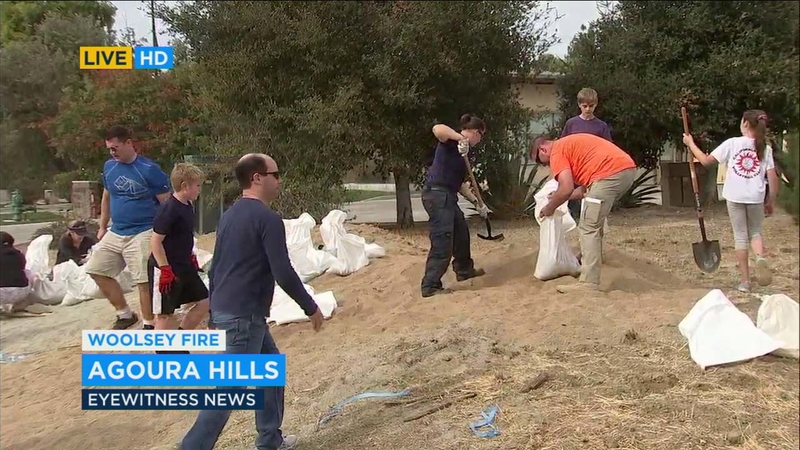 Woolsey Fire: Volunteers fill sandbags in ahead of looming rain

AGOURA HILLS, Calif. -- Volunteers banded together to fill sandbags at a local fire station in Agoura Hills ahead of looming rain that sparked concern over possible mud and debris flow in the Woolsey Fire burn area.

The volunteers included students from Agoura Hills High School as well as faculty and other community members.

Many volunteers said their homes survived the Woolsey Fire, so they just wanted to do what they could to help others in need.

With rain threatening to arrive sometime Wednesday afternoon or evening, mudslides are possible.

"We're just filling them up for people so they don't have to do it. It can be a pretty heavy duty lifting experience, so one guy or one woman trying to fill five sandbags and lift them in, that can be a little taxing on the heart, so like I said, we had some time to come out and fill some sandbags," said volunteer Brent Kast.

One family offered a helping hand, picking up loads of sandbags for a homeowner in fire-scarred Oak Park.

"Wednesday we know it's coming," Agoura Hills resident Jennifer Dato said. "So, we're trying to get it done as quickly as we can for them."

Several residents who lost their homes attended a community meeting organized by Ventura County officials to get information about resources available to help them recover.

"I'm worried about that because we've had mudslides when there hasn't been fires, major mudslides, and so it's just going to be worse," Malibu resident Rose Mataja said.