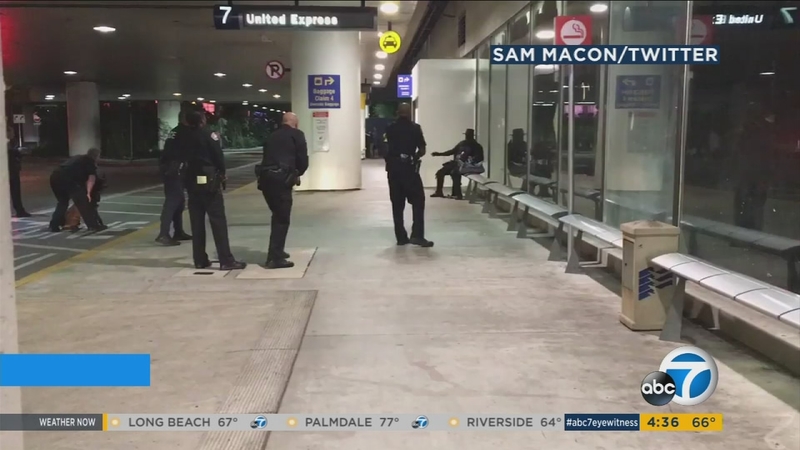 LOS ANGELES -- Amid the chaos as officers rushed to the Los Angeles International Airport for a false report of shots fired Sunday evening, one scene stood out as police surrounded a man dressed as Zorro.

Video captured officers with guns drawn surrounding the man as he sat outside Terminal 7.

The man stated he was on the phone calling for transportation from the airport when police told him to get on the ground.

Video showed the man on the ground with his arms spread as officers rushed toward him to place him in handcuffs.

"It's a plastic sword," the man could be heard saying.

"What happened was that somebody called and said there's a man in dark clothing out here and they got scared I guess. I don't know," the man dressed as Zorro, who did not reveal his name, said.

The Los Angeles Airport Police Division said in a statement that officers responded to reports of "a man dressed in black with a sword, wearing a mask."

"Believing the subject was armed with a sword, several Airport Police officers approached him with weapons drawn out of an abundance of caution," the statement continued.

According to authorities, the man was questioned and later released.

The masked passenger said he was unaware of the scare happening at LAX, and stated the officers were simply doing their job.

The false report at LAX spread via word-of-mouth as passengers and employees sprinted onto the airfield and into roadways near the central terminal area.

After an investigation, police determined there were no shots fired. The false report caused several delays, cancellations and diverted flights.

The scare at LAX came just weeks after panic and evacuations at New York's John F. Kennedy International Airport, which was also sparked by a false alarm.