Police say this is the sixth fatal collision and the sixth and seventh victims of 2022.
KGO 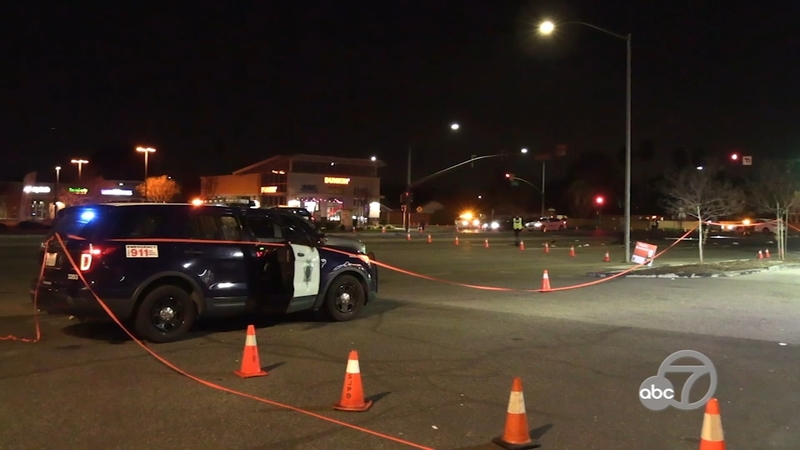 It happened just before 8:30 p.m. at Almaden Expressway and Foxworthy Avenue.

San Jose police says two of the three pedestrians were pronounced dead at local hospitals. The third pedestrian is injured, but expected to survive.

Units are currently at the scene of a fatal traffic collision involving a vehicle and three pedestrians. This occurred at Almaden Ex and Foxworthy Av.

"The driver of the vehicle remained on scene and was transported to a local hospital with minor injuries," police said.

SJPD is asking the public to avoid the area while they conduct an investigation, and that the intersection will be closed for several hours.

#DEVELOPING Clear trail of debris after a car crashed into three people at Foxworthy and Almaden in #SanJose.

Two of them are dead, the third is injured.

Officials went on to say this is the sixth fatal collision and the sixth and seventh victims of 2022.

This is also the fourth and fifth pedestrian fatality of 2022 according to police.

Councilwoman Pam Foley says, "This incident is as serious as it is tragic," in a plea for making safer roads. These fatalities "can be prevented," she said.

Tonight I was notified by SJPD that 3 pedestrians were hit near Foxworthy & Almaden Expy. This incident is as serious as it is tragic. We must do a better job at making our roadways safe. Traffic and pedestrians fatalities can be prevented. My heart aches for these victims.